The Heebie-Jeebie Girl: A Novel 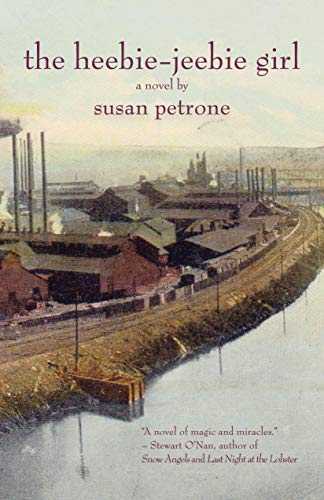 “This may be the real gift of this book and its real magic, Susan Petrone’s moving us from indifference to understanding and caring for others and our world, and that’s a very real transformation.”

Susan Petrone uses the voices of seven-year-old Hope; her granduncle Joe; her grandmother’s robber, Bobby; and finally the surprise voice of the city of Youngstown as commentator, to deliver a narrative full of delight and meaning.

It’s 1977, a year of great changes when the town’s steel mills shut down for good, a blizzard snowstorm sweeps through, and young Hope magically makes her first communion, while also picking one lottery number after another.

Brewing a Midwest brand of magic realism, Petrone develops a tale of family and values leading to redemption. As in her previous novels, Throw Like a Woman and The Super Ladies her humor is matched with her humanity. Few writers enter the working-class world so fully and vividly, a world Petrone knows from experience.

Most remarkable  is her use of her hometown Youngstown as a lively, ironic, yet blunt critic-observer. Here’s a sample of the town’s self-description:

“We all have our secrets and our slums. I may not be ancient, but one hundred seventy-five years is nothing to sneeze at. I’m not some Johnny-come-lately new suburb out in the boondocks or one of  those crazy planned retirement communities down in Florida. And I’m not a ghost town. There’s real history in me, things worth noticing, worth knowing. Writers and musicians and movie producers and real estate tycoons have called me home. You know Warner brothers? The ones who started a movie studio and named it after themselves? They were my boys. So was Harry Burt. You say you don’t know who Harry Burt was? Have you ever eaten an ice cream bar on a stick from the Good Humor man? Of course, you have, and you can thank Harry Burt for that. And for all you young punks, I have two words: Stiv Bators. Also one of mine.

“You might say plenty of cities can lay claim to famous sons and daughters. You might say that I’m dirty and worn out and unloved. Maybe. But does your city have magic? Not pretend, not some cheap sleight-of-hand, pay-no-attention-to-the-man-behind-the-curtain crap, but genuine can’t-be-explained-by-logic-or-reason magic?

Petrone manages such forthright statements that can at times seem overpowering, by balancing them with the novel’s characterizations and a fine degree of suspense as Joe and Hope take on the risky task of finding the villains who robbed Grandmother. Granduncle Joe shares his own hard truths when Hope asks, “Why doesn’t everybody go to work on Labor Day?” He responds:

“Because it’s a celebration of the people who work. The workers. You can thank the unions for that. People work hard, and for a long time the people who owned the factories took advantage of them until people got organized and demanded better treatment. That’s why we have a forty-hour workweek and a minimum wage and why a child your age isn’t allowed to work . . .

“Even if you didn’t work in one of the mills, you couldn’t escape them. Youngstown is full of steel mills, and the Sheet & Tube was the granddaddy of them all. The blast furnaces and railroad tracks were part of the landscape — you saw the steel and smelled it every day. If you were close enough, you heard it. If you were in there, you felt it. And everybody breathed it. When the wind was right, we’d have to sweep super-fine black steel dust off the front porch. The mill was everything. And then the owners just closed up shop, leaving five thousand workers and their families out in the cold.”

And so, it’s a story about a working-class city, one among a great many, yet what compels one to keep reading is the rich characterizations of Hope, and Joe, and, surprise, even Bobby who knocks Grandma down the stairs while posing as the water man. Remarkably we move from despising him to caring about his fate.

This may be the real gift of this book and its real magic, Susan Petrone’s moving us from indifference to understanding and caring for others and our world, and that’s a very real transformation.