Heaven and Earth: A Novel 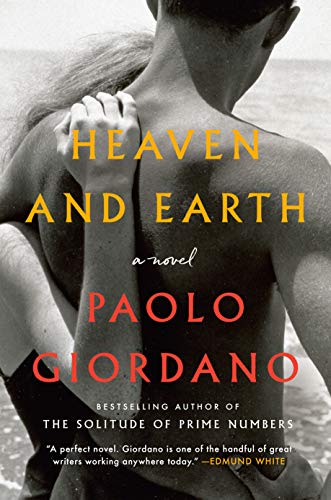 This wrenching, engrossing, and sometimes windy novel arrives on our shores firmly rooted in the Elena Ferrante tradition: a portrayal of an area in the south of Italy (Puglia in this case) that focuses on the struggle of a group of friends who grow up together and who, invariably, are pulled apart by tragic circumstances.

From an early age, the novel’s first-person protagonist, Turinese Teresa Gasparo, along with her father, spends part of every summer in her father’s childhood town of Speziale, Puglia. Teresa’s mother, a typical Nordista who bears a disgruntled disdain for southern Italy, insists on staying put in Turin. Feeling liberated from at least one of her overbearing parents, Tersesa becomes acquainted and entangled with a trio of boys her own age who live in a dilapidated villa next door. While two of the boys, Nicola and Bern, are first cousins, they, plus the third boy, Tomasso, have a loving, rambunctious and often contentious relationship and consider themselves brothers.

From the start Bern and Teresa are magnetically drawn to one another and develop a powerful no-strings attached sexual relationship that reignites at the beginning of summer and dies down at the end (when Teresa returns to the north), lasting several years until Teresa is at university.

At that time, during her yearly visit, she discovers a bunch of other people (besides Bern, Tomasso and Nicola) living commune-style at the villa next door, some of them environmental activists. All of these communards are going on nightly raids, either to free animals meant for slaughter, or trying to protect endangered species of plants and trees. Drawn in with them and rashly deciding to abandon her higher education to join the commune, Teresa pronounces these few years that the group remains in tight formation, the happiest time of her life.

But in a Ferrante-esque twist, the group is pulled apart and communal love turns to rage and rivalry and ultimately murder. Teresa and Bern officially become a couple, but then their relationship is seriously compromised by Teresa’s mysterious inability to get pregnant, a stressful conundrum that leads the couple to spend thousands of Euros on questionable fertility treatments and, eventually, to separate.

Giordano’s novel is vividly written, powerful, so often moving and engaging, but a bit unwieldy in several places and, one could perhaps argue, might have benefited from some judicious pruning. In one overly long scene, Tomasso is filling Teresa in on events that have been deliberately withheld from her by Bern as well as some other misadventures of which she is unaware.

The storytelling here is attenuated; Tomasso’s first-person narrative doesn’t quite sound like first person at all but rather third person. One ends up with passages like the following. Describing Bern’s departure from the apartment where he and Tommaso were staying, Tomasso tells Teresa, “When he left, the sun was sliced in half by the expanse of the sea, a sweaty ball that radiated an orangery glow into the apartment.  I remained standing until it was dark, then I acted with a resolve. . . .”

No disrespect to the translator, this spoken passage in English, sounds arch and certainly at odds with the Tommasso we’ve thus far gotten to know; and yet, reading the same passage in the original Italian actually feels like a better fit for the novel. More specifically, there are two words: lastra which has been translated as “expanse” but could also be translated as “sheet”; then the word “sweaty” which, in the Italian equivalent, sudaticcia,” is much more euphonious. But perhaps most important characteristic of this passage is the use of the passo remoto (past remote) tense, indicating an action that has taken place in the distant past; it is a tense used in Italian literature but less often in spoken Italian. The past remote tense lulls the reader into believing that a good yarn lies ahead (sadly, English has no equivalent for the past remote). Ultimately, the past remote tense is just better suited to overwrought dialogue. It’s also better suited to longer, baggier novels like Giordano’s and Ferrante’s internationally revered quartet, which also arguably could have benefited from judicious pruning here and there.

Two things of note to an American reader. First, a European import is rarely edited or changed for an American edition; the translation itself is edited for clarity and continuity, but not content. Second, the editorial process in Europe is as not rigorous as it is here.

European editors, on the other hand, tend to have a much lighter touch, albeit confidence in the writer’s original choices. They believe that the novel, by definition, is unwieldy and even awkward the way life itself can be unwieldy and awkward. They believe: if a novel is alive, then live and let live. And indeed, Heaven and Earth is a compelling, lovely, lively novel that will be great vacation reading.

Joseph Olshan, Editorial Director of Delphinium Books, is completing his 11th novel, set mostly in Italy where he spends a great deal of time.