The Heartbeat of Iran: Real Voices of A Country and Its People 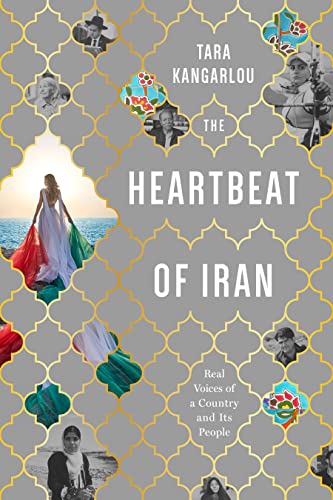 “there are a lot of contradictions in modern Iran, and reading this book will give you many valuable insights into how the country functions—with repression and tolerance going hand in hand.”

The news we get from Iran is mostly negative. Most recently, we learned that a new hardline president was elected, and is refusing to meet with President Biden. The news media leaves the impression of a religiously puritanical country that represses all personal freedoms.

There aren’t many western reporters actually living in Iran, so many impressions are gained from afar. Tara Kangarlou’s The Heartbeat of Iran performs a valuable service by offering many portraits of Persians at all strata of society. The author was born in Iran near the end of the Iran-Iraq war, but moved to the States with her mother in 2003. She continued to travel to Iran until 2011 and is now a reporter in the U.S. for outlets such as Vanity Fair, NBC, CNN, and Al Jazeera America.

Kangarlou doesn’t say how she conducted these interviews, but Zoom would appear to be a likely candidate. They offer well-written profiles of the subjects, with telling quotes and context—but not necessarily of the communities in which they live. She does the best she can with what she has and finds fascinating people. Because she’s Iranian by birth and culture, she gets her people to really open up. A few people hide their identities.

Transgender woman Taraneh Aram proudly shows her face, and why not? Not only is being transgender legal in Iran, but the government provides financial subsidies. This stems from a chance encounter Ayatollah Khomeini had with a transgender woman in 1982. Impressed, he issued a fatwa—granting rights to people who change their sex. This is true, despite the fact that gay sex is punishable by death in Iran. But “Nima” tells his story. He’s the son of high-ranking revolutionaries, who knew he was gay when he was 13.

Also perhaps surprising is the story of Rabbi Harav Yehuda Gerami. There is a synagogue just a few blocks from Iran’s Justice Department in Teheran, presided over by Yehuda, the only academically trained rabbi in the country. Jews in Iran are able to freely travel to Israel, despite the considerable enmity between the two countries, and Yehuda studied there at a prestigious yeshiva. “I never felt any prejudice against my Jewish community, as a child or while I was studying in the public school system,” he says. “The teachers were always respectful toward my faith.”

How does this square with the ADL opining that, “The Government of Iran is the most destructive and egregious state-sponsor of anti-Semitism in the world today, propagating a voluminous array of anti-Jewish propaganda, Holocaust denial, and instigating violence that specifically targets both the Jewish state as well as Jewish communities around the globe.”

There’s a big difference between what the government says and does and how ordinary people think and act. Obviously, Iran is also officially very anti-American, but U.S. tourists there almost universally report being warmly welcomed.

Are all Ayatollahs grim-faced puritans? Not according to this book. Retired Ayatollah Mohammed-Ali Abtahi—who worked for Iranian President Mohammed Khatami, a reformer, at the Ministry of Culture and Islamic Guidance—certainly looks the part. But he is a lover of American movies—with accolades for Woody Allen’s Midnight in Paris—and was a pioneer in opening Iran up to the wonders of the Internet. “I was the first cleric with a web log,” he says.

Kangarlou says that many of the post-revolution controls have been relaxed in modern-day Iran. “Nowadays, women's headscarves are loosely worn as ever before, people publicly curse the regime, and you can hear Cardi B., Beyoncé, or deep house music blasting from cars in the jammed pack traffic,” she writes. Satellite channels allow “unprecedented access to the global stage.”

Women definitely face many challenges in Iran, but professional schools are open to them (as they are in Saudi Arabia). One of the portraits is of young Nikoo Cheheltani, a professional diver and marine biologist, and another is of Laleh Seddigh, the world’s only Muslim female race car champion. She wears a hijab when she competes as “Little Schumacher,” after the Formula One driver Michael Schumacher. She has raced around the world, and could have emigrated many times but, “My entire family, failures, successes, struggles, wins, are all here.” And don’t forget Zahra Nemati, a paraplegic archer who’s won international competitions.

Sonia Abdollahi went to medical school and is today a specialist in emergency medicine. She complains that she doesn’t receive equal treatment from her male patients. “Why can’t you accept that a woman can also be a doctor?” she asks. “Some people are just ridiculous.”

Yes, there are a lot of contradictions in modern Iran, and reading this book will give you many valuable insights into how the country functions—with repression and tolerance going hand in hand.