Heart of Junk: A Novel 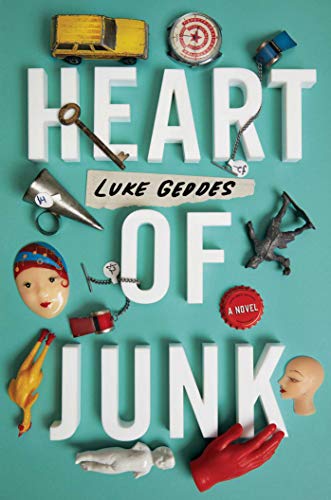 “Luke Geddes has an undeniable sense of Americana, and his work shows real promise.”

Antiques and collectibles are, by their nature, quirky. So, suggests Luke Geddes in Heart of Junk, are the dealers in such items. Heart of Junk revolves around a dying antique mall in Wichita, Kansas, and the oddballs who sell there. The mall is a huge, cavernous building, inconsistent in its approach, populated by some dealers who seek only company and some who’ll do anything for a profit. Some of the dealers are a little eccentric. Some are genuinely mad.

One of them has stolen something: a child.

The story is told from no fewer than seven points of view. Each character has his or her own obsessions, and each gives only a fragment of the whole story: that a child is missing, that the mall is on the verge of bankruptcy, that a relationship is on the verge of collapse.

Some of these perspectives are genuinely engaging. Most notable among these are Seymour and Lee. Married for years, queer, and newly arrived in Wichita following their own financial catastrophes, these two men offer separate, uncomfortable perspectives on aging. Lee’s aborted music career haunts him decades after its end. Never famous, he crowds anxiety out of his brain with obsessive record collecting and classification: “Artist and genre dividers were fine for those with small collections, but Lee would never be able to find anything without dividers dedicated to era and movement and sub-movement, e.g., ‘Xian Acid Folk 1966–69,’ ‘Private Press Folk Weirdos,’ and ‘Surf Rock Intro (Cosmic).’ That was just common sense.”

Seymour is more cynical about the process of amassing collections, but he can’t escape it. His geeky dedication to information (otaku-style, but trapped in the American Midwest) has become a larger symptom of his ennui: “He didn’t know who he was anymore. Seymour’s personality was a collection of quirks and affectations, defined more by the clothes or furniture and assorted junk he owned than attitude or disposition. His was more a commentary on what a personality was than a personality itself. He didn’t hate himself. He hated his stuff.”

In that passage lies Heart of Junk’s strongest commentary. “Picking,” collecting, antiquing, and other quests for items are, at their heart, only pretentious versions of materialism. Geddes reveals, subtly and gracefully, the lie beneath collector culture: that amassing objects isn’t in and of itself sophisticated or intellectual. Collectors of anything are obsessive. Ultimately, Barbie collectors aren’t better or worse than collectors of 19th century glass. The objects crowd out any real presence of the self.

If that discovery were the core of the story, Heart of Junk would be a powerful novel. It takes on the culture of American Pickers and HGTV. It successfully satirizes the commodification of authenticity without becoming heavy-handed. And within that, there’s a marriage about to crumble, urgent and sad at once.

Unfortunately, Seymour and Lee’s story is a subplot to the book. A child’s disappearance (accidentally kidnapped by another dealer) shrieks urgency, but it never achieves the same emotional depth. Missing child beauty queens are their own phenomenon, and on the whole, more grotesque than wry. The book doesn’t have enough room for two modes of satire.

Likewise, not all the characters have that crucial complexity and depth. Geddes shares the narrative among seven, but only a of those characters have human depth. The rest are caricatures: the madwoman with a Barbie collection, the middle-aged woman too fiercely repressing her desires, the rebellious teen, the dotty senior. They aren’t strong enough to hold up the story, and the story they’ve been given is tenuous and worn through in inconvenient places.

Luke Geddes has an undeniable sense of Americana, and his work shows real promise. If he can tear himself free of unnecessary quirkiness, his next novel should be remarkable.