A Heart Divided: The Definitive Edition (Legends of the Condor Heroes, 4) 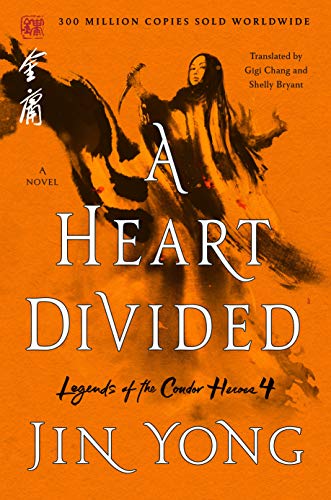 “In some ways, the greatest strength of this series lies in its smaller moments rather than its grand arc.”

The title of the fourth and final book in the English translation of Jin Yong’s Legends of the Condor Heroes series is by far the most on-point of the set. In fact, it carries a dual meaning, with the protagonist Guo Jing’s loyalties being pulled in conflicting directions on two separate points.

The first is the more personal of the two, as Guo Jing struggles with the choice between his betrothal to the Mongolian princess Khojin and his love for the wulin fighter Lotus Huang. Although the struggle is an understandable one, it would carry more weight if Khojin had a greater presence in the story; as it stands, she has largely been an offstage figure, and her few appearances here do little to mitigate that. What role she has is cause for one of the novel’s least comfortable moments, when she tries to reassure Guo Jing out of being intimidated by her father:

“Once we are married . . . I will forget that I am Genghis Khan’s daughter. I will just be Guo Jing’s wife. If you wish to beat me, berate me, you can do as you wish. You don’t have to hold back because the Great Khan is my father.”

In light of comments like that, it’s difficult not to root for Guo Jing to choose Lotus instead, who is deeply unlikely to encourage him to beat her as hard as he likes.

The second and broader of the two conflicts concerns Genghis Khan himself, and although it reaches a personal resolution, the conflict itself is very much left hanging. Partway through the novel, Guo Jing winds up (mostly) leaving the wulin and its battles behind, going instead to serve as one of the Great Khan’s commanders. But although he meets with military success, he is not easy in that role, intervening at one point to stop the slaughter of innocent people from a city that attempted to resist conquest. And when he realizes the Khan intends to conquer his own homeland, he faces a profound dilemma. Although Guo Jing makes his choice, war still looms on the horizon, its threat as yet unresolved.

This is partly a function of history, as the fate of the Southern Song Dynasty took longer to play out than the period covered by this tale, and partly a function of there being sequels to Legends of the Condor Heroes that cover the further adventures of Guo Jing and Lotus Huang.

But it does mean that, just as the story did not begin the way a Western fantasy might, it does not end with Western-style resolution, either. This is true on the micro scale as well as the macro: the second Contest of Mount Hua, held to determine the greatest master of the wulin, plays out rather differently from how the reader may expect. And the final fate of Yang Kang, Guo Jing’s sworn brother raised by the enemy, is not at all the climactic confrontation presented in countless fantasy novels and Hollywood films.

In some ways, the greatest strength of this series (or rather this novel, as its four-volume structure is an artificial division made for reasons of publication logistics) lies in its smaller moments rather than its grand arc. The series of events that estrange Guo Jing from Lotus for a time carry real emotional punch: so many estrangements in other stories hinge on characters simply not communicating with each other that it’s oddly refreshing to see one based in significant and understandable conflict.

This style of storytelling also leaves room to delve deeply into the histories and concerns of the secondary characters, rather than leaving everything focused on the main leads. This showed up previously in the saga of Cyclone Mei and her husband; here the spotlight temporarily rests on King Duan and his Consort Liu, their lives broken by selfishness, malice, and a tragedy that cannot be taken back.

Jin Yong’s sprawling saga is something of an undertaking to read, especially when it enters one of the cascading series of battles that stretch on for dozens of pages—material audiences have seen play out much more quickly and colorfully on a movie screen. Its best moments tend to be the quieter ones, when the characters stop punching for long enough to consider the meaning of their fighting. There’s a moment in A Heart Divided when Guo Jing wonders what the point of all his training is, and whether the world would be a better place if he just left the wulin behind forever. He doesn’t, of course—and this far into the series, the audience likely doesn’t want him to—but the mere fact that he asks that question makes him, and his story, more compelling.