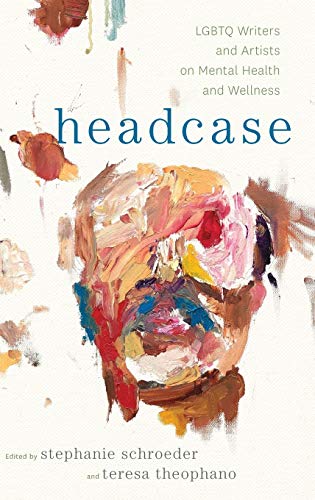 “Headcase is important reading for any LGBTQ persons with mental health and wellness concerns, and is equally important for the therapists who treat such populations.”

There is no doubt that American’s healthcare system is, in many ways, inadequate to the needs of the population. Progressives and conservatives may have widely disparate views of what is needed to fix the system, but all agree that a fix is needed. Policy proposals, perhaps by necessity, concentrate on the macroeconomic issues, dealing with how to achieve the maximum benefit for the minimum cost.

Headcase travels a narrower, more inductive, and ultimately more illuminating path. Rather than confront the entire medical industry, Headcase concentrates on the field of mental health, and then narrows further to cover the LGBTQ population. Some of the contributions are by psychiatrists, therapists, or social workers. Others are from current or former patients. Rather than limit the selections to essays and articles, editors Stephanie Schroeder and Teresa Theophano have also accepted poetry, fiction, drama, and visual art.

The points of view are as varied as the genres. Some contributors clearly see their therapy and their psychoactive medications as lifelines. Others view them as snares. Health insurance, in all its inconsistencies and vagaries, receives a great deal of attention, much of it negative.

The role of the therapist is repeatedly questioned—sometimes by the therapists themselves—as conventional therapy regimens are often designed to help a patient establish normalcy, whereas many of these avowedly queer clients don’t see normal behavior as a goal. Similarly, notions of race, class, and gender are frequently challenged, particularly when they serve, unchallenged, to prescribe both personal behaviors and therapeutic outcomes.

Not surprisingly, issues such as homophobia, internalized homophobia, and attempted conversion therapy make frequent appearances. In many other cases, maladies such as depression and bipolar disorder are the real problems, with the contributor’s sexuality or gender identification playing either a peripheral role, or leading to chicken-and-egg questions regarding which caused which, and whether they are related at all.

Some of the contributions are not as strong or as relevant as others, such as a visual art series having to do with Crohn’s Disease—which is not normally considered a mental health issue. Other essays, more academic than personal in nature, can be a bit dry, despite the interesting information they contain. For the most part, however, the selections are powerful and revelatory.

Headcase is important reading for any LGBTQ persons with mental health and wellness concerns, and is equally important for the therapists who treat such populations. It will challenge—and disturb—many complacencies and assumptions, and that is clearly where its value lies.