Hawking Hawking: The Selling of a Scientific Celebrity 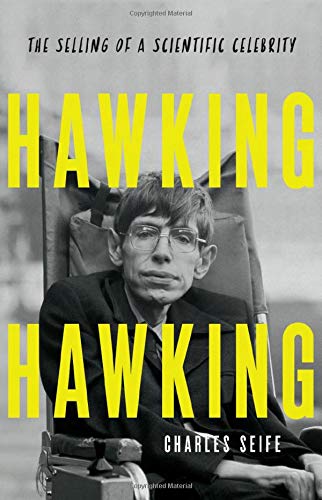 In November 1995, theoretical physicist Stephen Hawking (1942–2018) sold out London’s Royal Albert Hall (capacity: 5,900) for a lecture entitled “Does God Throw Dice in Black Holes?” A physicist had packed the hall only once before, in 1933. His name was Albert Einstein.

Probably only a few of those attending Hawking’s talk knew what it was really about, writes science writer and NYU journalism professor Charles Seife in Hawking Hawking. “But people didn’t buy tickets to a public Hawking lecture to learn physics,” he adds. “They were there to be in the presence of a great man.”

Judging by Seife’s account, much the same could probably be said about people who bought Hawking’s books, including the more than 10-million-copy selling A Brief History of Time (1988), which made the scientist wealthy.

Seife never speculates as to how many purchasers actually read that book, but he would undoubtedly note that a copy of A Brief History of Time, with a photo of wheelchair-bound pop icon Hawking emblazoned on the cover, affirmed one’s membership in the ranks of admirers who celebrated the heroic life and moving backstory of a brilliant disabled scientist.

The heroism stemmed from his survival. At 21, Hawking was diagnosed with a deadly neurological disease and given two or three years to live. His ailment would gradually take away his ability to walk, to write, to speak, and to feed himself.

Unable to move his body, Hawking traveled in a mechanized wheelchair, attended constantly by nurses. Before long, he needed complex machines that allowed him to communicate through a voice synthesizer.

The familiar image of Hawking speeding along in his wheelchair and painstakingly forming words—at the rate of three words a minute—made him an object of strong public interest. So did his appearances on Star Trek: The Next Generation and The Simpsons and his quotable pronouncements on time travel and alien life.

Indeed, and this is the core message of Seife’s book, Hawking eventually became “as much a brand as he was a person.” His scientific achievements, including advances in the understanding of space and time, were all in the past. Foremost in the public’s mind was Hawking’s life story, not the science.

Hawking was pleased to play the role of “science incarnate.” He held forth on many topics outside his specialty, from virtual reality to military technology, lent his voice-box software to directors, and allowed script writers and coauthors to write for him.

To say that we peek behind the curtain in this book is understatement. Seife, to his credit, explicates Hawking’s considerable scientific contributions at length. But he also gives new meaning to warts-and-all biography.

Hawking was a “flawed human being with an ego and a libido,” he writes. The scientist had a “yen for strip clubs (and even more risqué entertainment),” giving rise to British tabloid stories about the lap dances he received from naked women.

“Hawking was known as a scientist of the first rank and one of the most celebrated popularizers of science of our age. Yet in the last decade of his life, he did little science of note—certainly none considered to be of high import—and very little science communication. He was neither scientist nor communicator as much as he was a brand.”

A 1999 Physics World poll of some 259 physicists ranked Hawking at the bottom of a list of scientists who had made the most important contributions to physics, reports Seife. As for communicating science, Hawking drew on “digital memory” in giving talks: “It simply didn’t matter if Hawking had said something a hundred times before.”

“Hawking knew that his disability deeply affected the way the public perceived him, transforming him from mere human being into a living metaphor,” writes Seife. It was a “powerful” story, and Hawking ran with it.

With his immense medical expenses, including round-the-clock nursing, he was always in need of money. As a youth, he had the “mortal fears of a young man racing to establish a legacy—and a family—as a deadly disease appeared posed to claim him at any moment.” As time went on and the family grew (he had three children), why would he fear his disease any less? Money allowed him to survive.

He would dismiss comparison to Einstein and Newton, calling it “media hype,” but knowing it was central to his public identity. The identity allowed him to cultivate friendships with wealthy men, including an oil baron and a Russian oligarch, and to lend his name as a sales gimmick for a Stephen Hawkings’ Universe miniseries.

Many others were prepared to help hawk Hawkings, including Bantam Books, a publicity powerhouse, which traded ceaselessly on his public persona in publishing his best-seller A Brief History of Time.

The ostensible purpose of Hawking Hawking is to get underneath all of that to reveal “a real human: petulant, arrogant, and callous as well as warm, witty, and brilliant.” To that end, Seife tells Hawking’s story in reverse, from his death to his birth, to trim away all the awards and hoopla and reveal the true man. Doing so was a poor choice; it adds little to our understanding of the scientist.

A more puzzling decision is the author’s care to betray no empathy whatever for his subject. He clearly admires Hawking as a physicist but deplores the scientist’s complicity in hawking his brand. He’s entitled to that opinion, but it casts a wearisome pall over the book. It sometimes reads like a hatchet job.

Together with tawdry details on Hawking’s two difficult marriages, his sexual escapades, and his need for help with such matters as voiding, the author’s sometimes unseemly account will leave many readers unsettled. Hawking fans will be distressed; disability activists will be flummoxed. Readers seeking a less hard-edged life of the physicist must look elsewhere.