To Have and to Hoax: A Novel 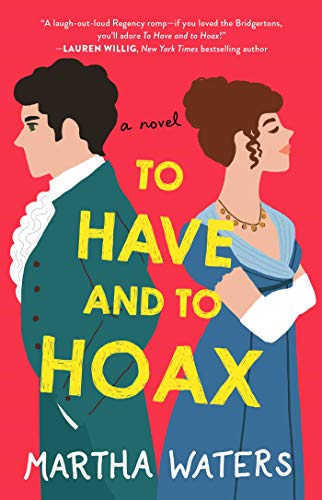 “Charming, clever, sensual, and brimming with comedic situations, To Have and to Hoax is a Regency battle of the sexes that will evoke gentle laughter as it enthralls.”

“My husband and I married for love, but we were very young,” Violet Audley tells her friend. “We have discovered that we did not suit so well as we thought.”

This, of course, is a lie. The two suit very well indeed. So well, in fact, that Violet devises a plan to make her husband admit he still loves—and trusts—her.

After a courtship and betrothal scandalous in their brevity, James Audley, second son of the Duke of Dovington, and Violet are married. The first year is bliss, but insecurity eventually raises its ugly head.

Being a second son, and “the spare” so to speak, James is generally ignored by his father in favor of his elder brother, making him feel neglected and unworthy and general untrusting of anyone. When he meets Violet, he believes she’s the only one who understands him.

During their second year, James overhears a conversation between Violet and his father in which the Duke admit he and Violet’s mother colluded to bring the two young people together for the express purpose of inveigling a marriage proposal from James.

Unfortunately, James believes Violet was in on the conspiracy and from that moment on, the thought that the one person he trusted betrayed him causes a violent schism in their relationship.

Now, it’s five years later and the most conversation the two have had is over their morning coffee. They greet each other, then go their separate ways.

When Violet learns James has been thrown from his horse and was unconscious for a day and never told her, she decides enough is enough. Believing desperate times call for desperate measures, she hires Lord Julian Belfry, a ne’er-do-well noble who has become an actor, to pretend to be a doctor and tell James she has consumption.

If learning his wife is dying doesn’t make James re-declare his love, nothing will.

Unfortunately, Lord Julian also informs James of the deception, and from that moment on, the two married conspirators lead each other a merry chase.

James is already tiring of this charade of a marriage, and it probably won’t take much to make him take that final step.

“He’s like to go back four years and undo every word he’d said to her that fateful morning when he discovered her conversing with his father. At the time, all he’d felt was betrayed, at the hands of the person most in the world, the only person, in fact. Now it all seemed less important.”

As in most Regency romances, there’s plenty of “smart” dialogue filled with double entendres and gibes to make the reader laugh.

As in this wonderful bit of a tongue-twister:

“He knew that she knew.

It was enough to give any man a headache, truly, but dash it, he knew this much: Violet knew that he knew that she wasn’t really ill.”

In spite of their estrangement, it’s obvious from the beginning that Violet and James are still madly in love, evidenced throughout the novel by their inner thoughts and well as some very outspoken ones. There are numerous heart-pounding reconciliations making the reader certain that this time, the two are finally together again, but then—James will overhear part of a conversation and storm off madly in all directions because he didn’t stay to hear the rest.

This happens so much as to nearly become tiresome, until the point is reached where the Regency fan who truly becomes embroiled in the characters’ problems might be prone to shout, “Stick around a minute and listen to the rest!”

Eventually James will own up to his part in the problem. He’ll realize he has to stop letting his anger with his father overshadow his life and become his own man—and stop listening at keyholes—and it’s that moment when the novel turns from near-farce into a beautiful love story.

Martha Waters has written a novel so delightful one might wish it could be continued. Indeed, there are enough plights of other characters for her to do so: What about James’ brother, West, and his unrequited love for the widowed Lady Fitzwilliam? Or Emily and Lord Belfry? Did Jeremy ever pay Diana after losing their wager?

Questions abound that only the author can answer.

There are three stories waiting to be told, and if Waters should decide to let her fans in on the others’ fates, be assured those tales will be as delightful as this one.

Charming, clever, sensual, and brimming with comedic situations, To Have and to Hoax is a Regency battle of the sexes that will evoke gentle laughter as it enthralls.