The EC Archives: The Haunt of Fear Volume 4 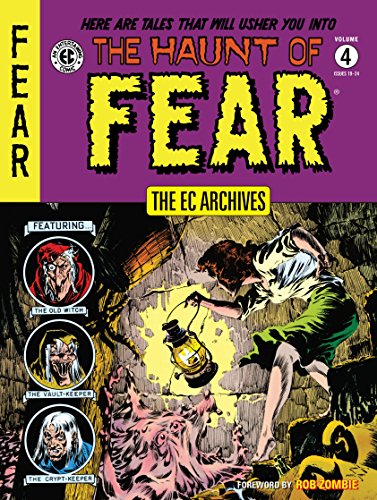 “the kind of comics that kept the nightlights on and made children check under their beds.”

Welcome to this fourth collection of spine-tingling stories, an assortment appalling acts, some truly terrible tales told by the awful occupants of the hideous haunt.

Who remembers their first encounter with The Haunt of Fear? At some point almost everyone has stumbled over these old penny dreadfuls raised to the price of a dime. Despite being created in the 1950s, these creepy comics have skulked around for decades, discovered and rediscovered at garage sales and flea markets, presented in bookstores as reissues, beckoning young readers to experience a darker side of comic books away from costumed superheroes and run-of-the-mill villains.

Three decrepit hosts would lure young readers through an assortment of short stories drawn with skills that set the bar high. The Old Witch, the Vault-Keeper, and the Crypt-Keeper act as guides for a great many youngsters into a world of maniacs and monsters spilling blood and guts.

The Haunt of Fear earned its rightful place in the pantheon of horror, as recognizable a name as The Twilight Zone and Stephen King. The effect it had on entertainment and culture cannot be overstated. The horror genre was new ground for comics at the time of its inception, and the influence of these stories carries on today. A great many books, films, and TV series were built on the foundations laid by The Haunt of Fear, as well as plenty of spin-offs and imitators on the comic book front. From thrilling short story collections by innumerable authors, to movies like Creepshow and Tales from the Dark Side, to television such as Tales from the Crypt and Black Mirror, almost every short-form design can trace its roots back to the style and substance of this classic horror comic.

Kicking off the book is an introduction by Grant Geissman that is as interesting as it is informative, supplying us with the story of the comic’s creation and subsequent rise to fame. Of equal intrigue is the foreword by Rob Zombie, who recounts his first discovery of The Haunt of Fear as a young boy. He describes the powerful and almost forbidden magnetism of the art and stories, something that greatly influenced him to become the music/filmmaker he is today.

Making up the collection are issues #19–24 of The Haunt of Fear, presented in digitally remastered color. Each issue features five tales told in comic form, plus a short story, and finally a column featuring letters written by fans and answered by The Old Witch.

You get 24 scary stories with some additional content, not a bad deal for a trip down memory lane! As nostalgic as it all is, however, the collection also proves how bad the material could be too at times (occasionally laughably so). The three old crones’ groan-worthy puns, atrocious alliteration, and cheesy jokes littering the intros and outros are one thing, but the stories themselves sometimes leave a lot to be desired.

Readers are led by the hand all too often, characters’ dialogue leaving little to the imagination. Most endings can be guessed long before anyone reaches the halfway point. In contrast, sometimes plot developments or revelations come out of nowhere with no setup or logic, leaving readers with a raised eyebrow or creased forehead.

A good number of stories rely heavily (often directly) on the standard-setting predecessors of long ago. Attempts to put new spins on old stories are frequent; Jekyll & Hyde, Bluebeard, Grimm’s fairytales, the works of Edgar Allen Poe, as well an assortment of vampire and werewolf lore. There is no question how outdated it all is, and many of these tales don’t hold up today. It’s something nobody probably noticed when they were young and impressionable, but we become painfully aware of it now as adults looking back.

But The Haunt of Fear had its place and time, making a hell of an impact when it was fresh and unsettling. Best to remember it that way and enjoy these old offerings as a time capsule filled with the stuff of 1950s nightmares, the kind of comics that kept the nightlights on and made children check under their beds.