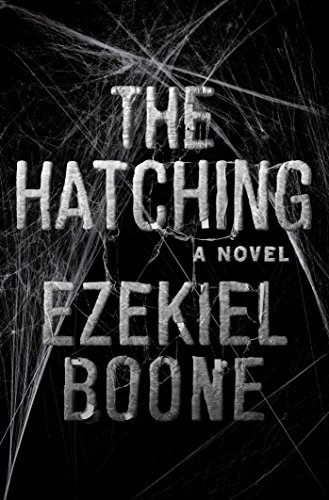 “. . . enough horror to transform the most steadfast insect-lover into an arachnophobe.”

A fossilized egg sac found under one of the Nazca carvings is delivered to a scientist specializing in the study of spiders. China nukes a village in a remote part of its own country. Earthquakes in India are tied to Delhi being overrun by enormous spiders . . .

When a billionaire’s plane returning from Peru crashes in Minneapolis killing everyone on board, an FBI agent is sent to contain the scene. Special Agent Mike Rich’s life isn’t exactly calm at the moment. His ex-wife has remarried, and she wants to change their daughter’s name to that of her new husband. The problem is: Mike and the new guy get along, though there are the usual ex- and current spouse rivalries, but he wants his daughter to keep his name. In a short time, Mike’s life will become more complicated than he can ever imagine, when he enters the plane’s wreckage and witnesses a gigantic spider emerging from billionaire Bill Henderson’s corpse.

Melanie Guyer is an arachnologist. She’s just received a package from a colleague studying the Nazca Lines in Peru, a package containing a ten thousand-year-old fossilized egg sac found under the carving of a spider. What’s more interesting, however, is that the sac is now hatching.

In Washington, DC, Melanie’s ex-husband is trying to help the president decide whether China’s dropping of a nuclear weapon inside its own borders is an accident, an outward sign of aggression, or exactly what . . .

Then a ship crashes into the Port of Los Angeles with the entire crew dead. Spiders pour out of the hold and into the city.

Within hours, martial law is established in L.A. Mike brings the captured spider to Melanie’s lab for study, and the president is on the line asking for information and a way to stop the invasion.

Melanie’s observations prove a few enlightening facts. The spiders act more like ants or bees. Generally creatures preferring isolation from even their own kind, these are working together. They’re specialized, they’re attracted to fresh blood, and they are appearing worldwide.

No city and no country on earth appears exempt from the invasion.

The Hatching is a well-written story, with an attention-holding premise. The narrative is concise and easy to read; however, there are so many individuals introduced at the beginning it’s often difficult to remember some of them before the story narrows to the main few. Nevertheless, the characters are real and likable, and we want to know what happens to them—though Melanie is irritably contradictory; she says one thing then immediately follows it with the exact opposite.

It’s a fast-moving story, racing toward a supposedly devastating climax that doesn’t appear, not on the printed page, at least. The Epilogue is nine single-page entries, several consisting of only one or two paragraphs, and then . . . with a suddenness undoubtedly leaving the reader with more questions than answers . . . nothing . . . an unsatisfying and unsatisfactory way to end a novel, unless there’s a sequel waiting in the wings.

It’s an original plot, with a horrifying premise guaranteed to entertain and shock the reader. As far as it goes, The Hatching is a page-turner. Unfortunately, it doesn’t go far enough, for it gives the impression that the author simply ran out of ideas. Nevertheless, the existing story’s descriptions contain enough horror to transform the most steadfast insect-lover into an arachnophobe.