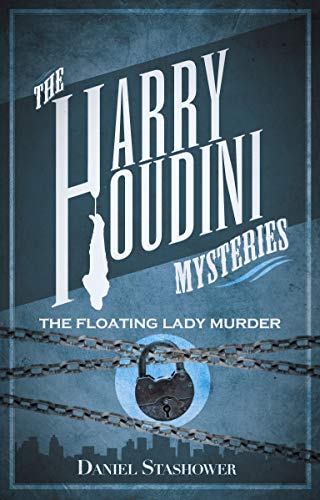 Every magician has a trick that he dreams about performing and spends years perfecting. In 1898, for Harry Kellar, “the dean of American magicians” it is The Floating Lady. It would be no mere levitation—that’s been done. Kellar’s idea is that the lady not only floats, she floats out into the audience, above their heads. Amazing, spectacular, and it would seal Kellar’s reputation as a great magician.

Kellar’s mentor, The Wizard of Kalliffa (real name Duncan McGregor), was not able to pull it off—as a matter of fact the night he premiered it, Mrs. Macgregor (in her guise as the floating lady) fell to her death. It ruined McGregor, who fell on hard times and drank his life away. But Kellar is determined to premier the illusion on the 25th anniversary of that attempt, now just a few days away. And he hasn’t yet perfected the trick.

Harry Houdini, his wife Bess and brother Dash are hired by Kellar. They come up with a way to make the illusion work. But as you probably already guessed, the tragedy repeats itself—with one difference: the lady doesn’t die of injuries from falling, she drowns. Now that, my friends, is an illusion.

This is another well-crafted entry in the Harry Houdini mysteries series. The ways Harry and Dash dream up for the illusion to work, then discount them, provides a window into what makes a great trick. It shows the author’s skill (who is also a magician) giving the reader a very convincing peek backstage at the world of magic.

Don’t despair over knowing how this one illusion is preformed—there are plenty of others that will keep you guessing as well.