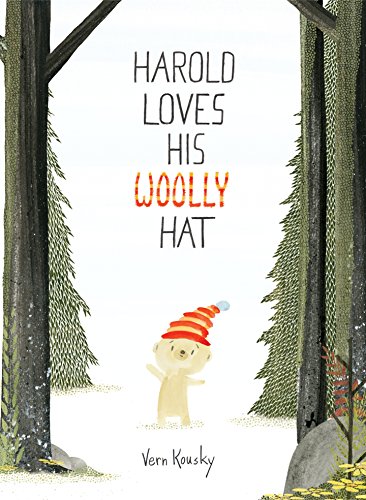 “A masterful combination of words and pictures, Harold Loves His Woolly Hat is about love and the different forms it can take, if only you open your eyes to it and are willing to see.”

Readers who find Jon Klassen's I Want My Hat Back too violent will find the antidote to that story in Harold Loves His Woolly Hat by Vern Kousky. In Klassen's subversive book, the main character, a bear, loses his hat to a sneaky rabbit. In response, the bear eats the rabbit (although the actual devouring isn't shown, the pictures make it clear what has happened).

In Kousky's book the main character is again a bear, Harold. Harold also loses his hat, only not to a rabbit but to a crow who snatches it off his head. Harold offers all kinds of things in trade for the hat, from worms to blueberries to his secret shiny treasures. The crow happily takes each gift without, however, returning the hat. The art is simple but powerful, especially in the page filled with the angry words “NOW WILL YOU GIVE ME BACK MY WOOLLY HAT?!” The facing page of a huge angry bear face echoes how any child feels when a favorite toy has been stolen.

Harold has no choice but to climb up the tall, tall tree where the crow nests. There he finds his hat. Only it's not a hat anymore, it's bedding for three baby crow chicks. Harold doesn't snatch his hat back. He doesn't eat the chicks. Instead he changes how he feels both about the hat and its theft.

The story teaches empathy without being heavy-handed. It also shows how our perceptions can change when we have more information about a situation. The crow changes from being a sneaky thief into a devoted mother. Harold changes from being angry to understanding. The wordless ending shows the baby chicks grown up and flying off while Harold and the mother crow watch them, sitting cozily on a branch together. This is the kind of picture book that provokes a lot of discussion between child and adult reader—the kind of picture book more adults should read all by themselves.

A masterful combination of words and pictures, Harold Loves His Woolly Hat is about love and the different forms it can take, if only you open your eyes to it and are willing to see.