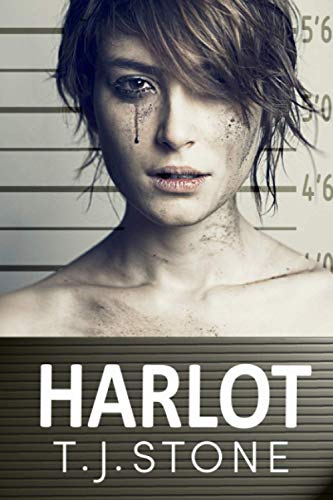 Though there are glimmers of potential and heart, Saskia Walker’s The Harlot is marred with frustrating—and avoidable—flaws.

The titular character is Jessie, a woman born of the highlands who, due to a number of sad events including her own orphaning because of her mother being burned as a witch, finds herself in a seaside village in the lowlands working on her back to keep herself fed. Though she accepts men into her bed for coin, she has developed a reputation for being a woman who is particularly enthusiastic about her work.

She catches Gregor’s eye one night, while fighting another prostitute in a pub for some custom. Gregor admires her spirit—and also her arse, fully on view as she tumbles around the floor—and decides she’s perfect for a task he needs completing.

Surprisingly, said task is not to warm his bed, though Jessie certainly does plenty of that. Gregor is in town after a decade at sea to avenge his father’s death and take vengeance on the man who ruined his family. To do so, he needs information. To get it, he needs a woman who can pose as a servant and infiltrate a house—and do anything necessary up to and including seducing the master. Gregor is prepared to pay well, but he needs someone he can trust.

Jessie herself has a number of reasons to take Gregor’s offer. The purse would see her make the journey back to her home in comfort, and an offer of aid has led to an accusation of witchcraft on her part as well, so a quick exit is warranted. Furthermore, she finds Gregor very attractive, and the idea of spending time with him has its own appeal.

There are positives to the novel, strengths that Ms. Walker displays; however, each is thwarted by an arresting flaw. The characters of Gregor and Jessie, for example, are drawn quickly and completely, so the reader has a strong idea of who they are and what they want very early on in the novel. But rather than building on that strength to effectively show, not tell, Walker often shows, then tells, leading to long, extraneous descriptive passages—as if she does not trust the reader to follow her lead.

The plot elements are well crafted, but the novel spends the bulk of its time in the preparation, leaving the actual goal—where most of the reader’s interest will lie—and final denouement both rushed and unfulfilling. There are also elements of interest that are picked up, then dropped; future plot elements hinted at, but never eventuating; and pages and pages devoted to the mundane, halting any momentum the author may have built.

Finally, Ms. Walker has a deft touch with eroticism—those parts in which Jessie is practicing her demure servant persona are particularly well-done—but there are a number of patched on sex scenes that are not only unnecessary, but baffling in their inclusion, having no relationship to the plot, the characters, or any subplot taking place at the time.

The combination of all these problems leads to one unfortunate eventuality: This is a book to be skimmed, not savored.