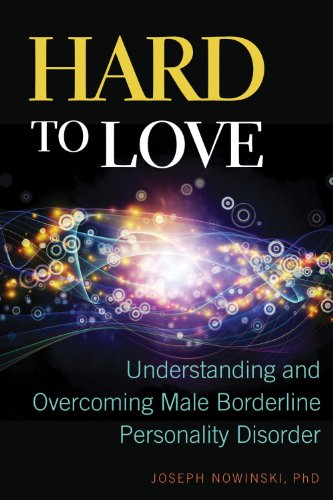 “Hard to Love is a courageous endeavor that simplifies a very complex, enigmatic disorder and clarifies both symptoms and solutions. This book would be very helpful for loved ones whose challenge is dealing with or loving either men or women with BPD.”

Placing BPD in perspective, it is a relatively recent addition (accepted in 1980 by the American Psychiatric Association) to the DSM (Diagnostic and Statistical Manual) which allows clinicians to diagnose mental illnesses. This particular diagnosis is 1 of 10 personality disorders and according to The National Institute of Mental Health BPD affects approximately 1–2% of Americans.

Although the numbers may appear to be smaller than for other diagnoses, BPD is often both overlooked and misdiagnosed. Related behaviors such as self-mutilation, suicide attempts, or substance abuse can be symptomatic of the underlying cause that when examined more closely, is deemed to be Borderline Personality Disorder. A vital statistic released by the National Institute of Mental Health states, “As many as 80% of people with Borderline Personality Disorder have suicidal behaviors and about 4–9% actually commit suicide.” For obvious reasons, it is a disorder not to be taken lightly.

Hard to Love is a simple (but not simplistic) guide for both patients and loved ones who are desperately trying to cope with this illness. What makes this book different than others in the psychology/self-help genre is that Dr. Nowinski’s focus is an examination of the Male Personality Disorder in particular. It is atypical in the field of psychiatry for clinicians to write a book on disorders along gender lines.

Though people with Borderline Personality of both genders have symptoms in common, treatment methods vary somewhat for males. According to Author Nowinski it is commonplace for men with this disorder “in an effort to save face, they may deny their sensitivity or their deep insecurity. Instead they may be willing to accept a label of ‘antisocial personality,’ ‘depression’ or’ impulse control disorder.’”

According to Dr. Nowinski, the main criteria associated with Borderline Personality Disorder in both genders is a negative self-image that prevents the development of any semblance of self-esteem.

Treatment for Male Borderline Personality involves dealing with the deep insecurity that belies the illness. According to Nowinski, the cause of an adult male feeling like “damaged goods” is “rooted in early experiences of rejection, abuse or abandonment and is typically not connected in the mind of the MDPD man with behaviors such as being 1) hypervigilant to rejection and quick to feel hurt or anger, 2) easily depressed, quick tempered, or experiencing free-floating anxiety, 3) using substances to deal with negative feelings. In short, this man doesn’t “connect the dots between early experiences and his behavior as an adult.”

So what are the solutions for both patients with Male Borderline Personality Disorder and those who are in relationships with them? There are a number of treatment modalities suggested by Nowinski that are alternatives to remedies suggested by other clinicians. They include: 1) mindfulness-based stress reduction which was originally used for people to help ease chronic pain. The type used for MBPD patients is referred to as Mindful Meditation and if practiced daily can reduce anxiety to be used as an adjunct or replacement for antianxiety medications. 2) yoga for reducing stress, 3) massage to relax both the body and the mind, 4) helping the patient connect thoughts and words to feelings.

Men in general have more challenges connecting to their feelings than women do. Men with Borderline Personality Disorder are not able to articulate their feelings other than expressing anger or fear of abandonment, i.e. predominantly negative emotions. Thus the clinician facilitates a process to enable the man to “give a voice to his feelings.” Finding one’s voice and expressing it can build a solid foundation for a man with MBPD to develop the missing link of self-esteem that can help him connect the dots to enhance both his relationships and feelings of self-worth.

There are other useful guidelines delineated in Hard to Love that help males with BPD along with their loved ones to create more positive relationships, such as setting healthy boundaries and learning to balance individual needs with time spent together. To illustrate how healthy relationships can be achieved, Dr. Nowinski delineates various vignettes that are helpful for the reader to understand the development and process involved to accomplish this endeavor.

Hard to Love is a courageous endeavor that simplifies a very complex, enigmatic disorder and clarifies both symptoms and solutions. This book would be very helpful for loved ones whose challenge is dealing with or loving either men or women with BPD. It can also be a companion in treatment for the person who actually is affected with the disorder.