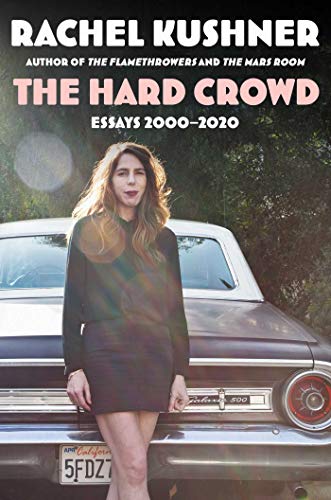 As with her four brilliant novels, Rachel Kushner’s The Hard Crowd, 19 essays from the last two decades, takes the reader on a wild ride. She is the kind of writer who comes straight at you in understated sentences that always add up to much more than their individual parts of speech. Her essays, like her fiction, are invariably thought provoking and moving, by turns surprising and heartbreaking.

The first essay in the collection—“Girl on a Motorcycle,” feels like an autobiographical footnote to her 2013 novel The Flamethrowers—sets the landscape for the other 18 essays. “Girl on a Motorcycle” begins with an image of her father’s 1955 Vincent Black Shadow cycle and then maneuvers through the Alain Delon-Marianne Faithful film Girl on a Motorcycle and on to a riveting account of the 1,080-mile motorcycle race in Mexico called the Cabo 1000, in which participants typically average over 100 mph for ten hours over rutted, twisting roads. It’s an adventure story that describes Kushner crashing at 130 mph on a mountain road, a disastrous accident reminiscent of the one her un-named narrator endures in The Flamethrowers. All the essays that follow in the collection are impressionistic and tantalizing in a similar fashion, compelling the reader to connect eclectic images and anecdotes that add up to a meditation on entropy, death, art, and memory.

The essays in the collection track a lot of ground—from the Shuafat Refugee Camp in East Jerusalem and Baha Nababta, community organizer, ordinary man, and unforgettable hero, to a cross-country trip in the company of some angelic truckers. Along the way, in other essays, Kushner pauses to ponder the brilliance of Cormac McCarthy’s Border Trilogy, Denis Johnson’s inimitable prose, Jeff Koons’s self-conscious art, Marguerite Duras’s singular gifts, the life and work of the Brazilian writer Clarice Lispector, and, of course, the sensibility of her hometown, San Francisco.

In Kushner’s hands, San Francisco and its hard crowd become a personality, a place shadowed by death but vibrating with life. In Kushner’s reminiscences, San Francisco is as much a place falling apart, a city where the center cannot hold, as it is in the earlier work of Joan Didion. Kushner offers an inside view of the Bay Area music scene in the 1990’s, venues like the Warfield and the re-opened Fillmore, post-Bill Graham. Watching those musicians taught her something: “The message I took from it was: to be truly good at something is the very highest joy.”

Kushner describes her experiences as a bartender in San Francisco in the days after she graduated from UC Berkeley and before she headed to New York City determined to become a writer, acknowledging to herself that “to merely witness greatness is a distant cousin, or not even related at all” to that very highest joy she was after. But she did witness some memorable moments: a fistfight between Bill Graham and one of her friends, who was trying to sneak into a concert; Jerry Garcia’s monumental drug habit; Carlos Santana’s parsimony; and Johnny Cash, Debbie Harry, Neil Young, Iggy Pop, and Smashing Pumpkins all in her purview. She watched Mick Jagger, wearing an ascot, drink Evian and serve his crew drinks while she shared bartending duties with Keith Richards.

A few of the essays in Kushner’s collection are esoteric, drifting from the impressionistic into the arcane, but even the murky moments usually have the quick and surprising light of a shooting star to them—“I’m not the first to assert that reality has become false, an ideology, a fiction, a novel. Many understand this, that reality is an argument for itself and not a real, true thing.”

The titular and final essay in the volume, “The Hard Crowd,” is one of the most compelling. It’s a coming-of-age story that begins by alluding to a Bob Dylan song and the lyrics “he not busy being born is busy dying.” This idea—of living fully, witnessing deeply, remembering passionately—holds many of the pieces together, making a collage with one clear image. As Kushner says, “I prefer memories that stay fragile, vulnerable to erasure, like the soft feel of the velvet couches in Freddy’s living room facing Oak Street, where we all hung out. Plush, elegant furniture bought by someone living a perilous high life.”

Kushner, now a writer rather than a bartender or daredevil motorcyclist, is “no longer being born.” Now, “boggled by the gallery of souls I’ve known,” she keeps her tally, she offers her litany, she writes.