The Happiest Man on Earth: The Beautiful Life of an Auschwitz Survivor 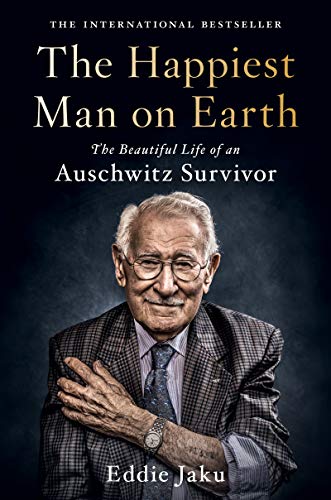 “A German man was weak and easily manipulated. These weak men lost all of their morals and then their humanity. I witnessed how they took children from their mothers and bashed their heads against the wall. They could torture others and then go home and face their wives and children. I don’t understand that.”—Eddie Jaku

Have you ever wondered just how depraved, disgusting, and inhuman a person can be? Or just how devastatingly ruthless and murderous a society can become, in committing massive genocide? Can you imagine an enormous camp of torment, slavery, and certain death? A place where innocent people are starved and infected deliberately with the worst possible diseases, a torture chamber where medical experiments are performed upon the innocent, without anesthesia? Can you imagine marching for hundreds of miles in a frozen countryside with minimal clothing, no food or water, and rags for shoes? Can you imagine surviving all of this, only to discover that everyone you loved had been murdered?

This is the story of Eddie Jaku, a Jewish survivor of the Nazi genocide, who by a combination of strength of mind, physical fitness, having the right skills for the masters of society, and pure luck on his side endured excruciating brutality and torture. He accomplished the impossibility of survival.

What do you suppose Eddie discovered in the heaping, fetid piles of bodies on their way to the crematoria? He found the beauty of loving and caring people. No, almost none were German. But deep inside the darkness of endless agony, Jews and others incarcerated by Nazi Germany helped each other to survive, at least for a while. It was that tiny spark of love in the darkness that gave Eddie Jaku the strength to survive. He looked the Nazi monsters in the eyes and defeated them by remaining alive.

Typically, the memoir of a survivor will be the only book that they ever compose. It is not intended as a work of art. In most cases, it is a one-way dialogue fashioned for their progeny, produced in an attempt to explain the veracity of their experiences. Such memoirs are typically a colorless recounting of distant memory, tainted by time, distance, and confabulation.

But once in a while, a memoir author plucks ripe old memories like perfect apples from a tree, with rare and absolute clarity. So it is with Eddie Jaku and The Happiest Man on Earth. His is a formidable memory, replete with astounding, uncommon detail and bursting with sensory information that brings pictures, sounds, smells, and tastes to the reader. We walk through seven years of Eddie’s life, suffering abominable torture at his side, as he recounts horrific events and emotions—and sometimes love and respect.

This is not a recollection of life filled with verbosity or flowery dramatic presentations. What Jaku saw, the reader perceives. His writing style is very direct and concise. Jaku gives you the facts of his incarceration under the Nazis’ brutal rule. The reader is surrounded by the most wicked actions known to humanity against millions of innocent families whose only crime was their spiritual faith, their preferred sexuality, their rambling natures, or their physical challenges.

Jaku also shares his life after the Holocaust to the fullest extent possible. We relish in his marriage, career, and especially the depth of love he has for his children and grandchildren.

Eddie Jaku’s story honors the countless murdered millions, whose voices, like their lives and loves, were cut short by bigotry and hate. Through his recounting of terror, starvation, sickness, and the deep sadness of his murdered family, we walk in the shadow of the very worst genocide in history. No human deserved the pain, suffering, and brutality that was inflicted upon the victims of the Holocaust. Yet Eddie Jaku takes us by the hand and walks us through this inhuman disaster with head held high. Walking in Jaku’s shoes also reveals to us the enormity of love that strangers develop for each other under incredibly tragic circumstances. Eddie Jaku lifts our spirits.