Hannibal’s Oath: The Life and Wars of Rome’s Greatest Enemy 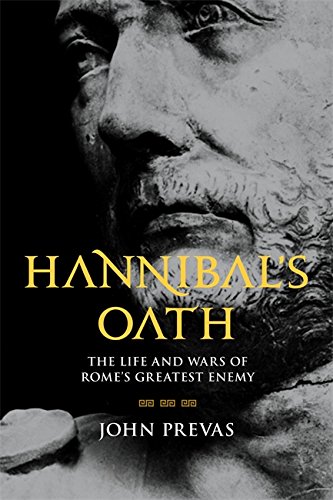 "Prevas intimately knows the battlefields, mountains, and rivers; he takes the reader on a sort of travelogue as well as telling a great immortal story."

Longer and more detailed works on Hannibal, the great enemy of Rome "possessed by the ghost of his father" have been published. His campaigns are the very definition of epic but it is a long story. Hannibal spent 15 years just campaigning in Italy.

This short work makes for entertaining, fast, thought provoking reading. Author John Prevas gives it a different more balanced account than most works. In Hannibal's Oath, the leaders of the corporate trading state theocracy of Carthage, for example, have rational reasons for ending its First Punic War.

As Prevas explains, Carthage had its fleet destroyed. Even had the 1,000 vessels reinforced General Hamilcar In Sicily, the future lay with Carthage's leaders "developing a land-based largely agricultural empire in North Africa." That leadership sought to end "a futile, costly, and indecisive conflict" with Rome "that had gone on for nearly a quarter of a century."

The Carthaginians paid dearly for this failed investment in war. Their mercenaries rebelled and "attacked the villas and plantations, pillaging, raping, and murdering rich and poor alike." Sicily and a huge indemnity were turned over to Rome, which also took Corsica and Sardinia.

Hamilcar, the general forced to surrender in Sicily, felt betrayed but even he had a vision of a new Carthaginian empire. He conquered "needed new areas of development." Spain, with its silver resources, alone could recoup the financial losses of the war. Even Carthage by itself proved wealthy enough to bounce back from each of its three defeats in wars with Rome.

The point of Hannibal's Oath is the obsession of Hamilcar with avenging the blatant aggression and deceit of the Romans. He made the family connections to gain permission for a new war with Rome with the dream that "he would reenact at Rome the destruction of Troy."

This Second Punic War was fought by Hannibal, Hamilcar's famous son. It was not wanted by either side. The fighting began with the long siege of Saguntum in Spain. There Hannibal would "kindle a massive configuration." The gold he took at his victory "bought the government and people of Carthage behind him."

Then "Hannibal was ready to take his war to Italy," the author writes. He took five months to cross the Alps at a cost of half of his army in avalanche ambushes but at no loss of his elephants. Those casualties, however, "hobbled his army and perhaps even compromised his ability to defeat Rome in the end."

The author describes the legendary warrior as one who "always retained the initiative and would determine when, where, and how he would fight." He was trained in "politics and diplomacy." Hannibal "would inspire those he led by example" and won great victories with "his ability to think outside the confines of conventional strategy." Hannibal was also a soldier of his times; that is he was a brutal killer.

Almost 16 years later, however, Hannibal lost for the last time and at Zama near Carthage in North Africa. Long before then, "Hannibal lost his momentum and a slow hemorrhage set it." Prevas further wrote that "the Romans absorbed their losses, put more men the field, and continued to resist."

From the beginning, the Romans used their far greater resources, including ships, to defeat Carthage wherever Hannibal was not. The Republic, soon after to become the Roman Empire, defeated the son as it had the father "by the passing of time and the crunching of numbers."

Hannibal's Oath has a helpful chronology, glossary of characters, and detailed maps. The book, despite its size, covers much not discussed or missed elsewhere in other books, such as Hannibal's elephants in northern Italian battles and the unrelated (?) second Carthaginian invasion from Spain.

This work benefits as much from its author as its history. Prevas intimately knows the battlefields, mountains, and rivers; he takes the reader on a sort of travelogue as well as telling a great immortal story.