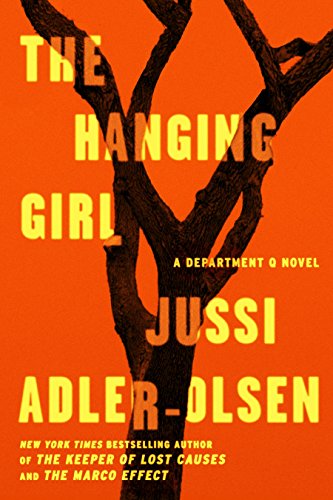 Something may have been lost in the translation, but The Hanging Girl by Jussi Adler-Olsen is flat. Adler-Olsen’s previous successes with his Q Department novels and awards he has won do not reflect well in this novel.

Presumably Carl Mørck, head of the Q Department, is the protagonist, but he comes across as lazy and disagreeable. Perhaps that is how he is supposed to be portrayed, but there is very little reason to cheer for him. Adler-Olsen’s other characters have little, if any, dimension; visualizing them is difficult.

There is some description given of Mørck’s assistants Assad and Rose. Rose has some job responsibilities with her computer knowledge and organizational skills. Assad appears to be the comic sidekick who can’t seem to get the words right: strawstack instead of haystack. Considering that both of these characters have appeared in previous Q Department stories, it must be assumed that Adler-Olsen’s fans are already familiar with them and details are not needed. The other characters in the story all seem to be angry or manipulative—it’s hard to find anyone likable.

The premise of the story—a cold case file that has driven a police officer to suicide, but not until he has left clues for Mørck and his assistants to find in order to keep the cold case alive—would be workable if the story followed that line with fewer diversions.

The Q Department’s gathering of the mountain of information from the deceased police officer’s home is a little hard to fathom. With the information described as boxes and boxes of papers, magazines, books, letters, photos, etc., all neatly organized by Rose in an extremely short time span, it’s hard to believe that any organization could suddenly reveal the small clues and evidence needed to solve this crime.

Initially, the story does little to encourage the reader to turn the page. The storyline jumps forward and backward in time, and it almost seems that at the beginning of the story there is another storyline with no connection. This is a side story that starts at an earlier time and involves an alternative religious (cult) group. The scenes around this group are more interesting than those about the cold case file, and one must trudge through half of the book before the two issues begin to knit together in the story.

Although Adler-Olsen does a satisfactory job of tying up loose ends, the whole purpose of the story remains elusive. It’s hard to understand why a policeman would gather this large amount of information and leave it behind for others to explore, when the reality is that the police officer already knew the sad answer.

One interesting turn that is difficult to understand is what Adler-Olsen does with Mørck’s assistant Rose at the end of the book. She has appeared in previous Q Department books, and if his purpose was to write her out of the series, presumably he has succeeded, and she may not be returning in any subsequent Q Department tales. Of course, fiction being what it is, she might come around again. . . .

Considering Adler-Olsen is a popular crime writer in Denmark one can only hope that with The Hanging Girl the translation to English is faulty, and in his own language he has painted a much more interesting and vivid picture.