A Hand to Hold in Deep Water 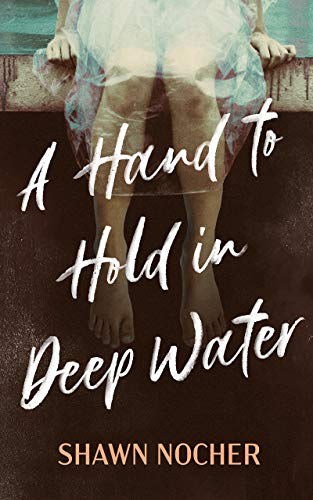 There’s a wonderful sense of place in A Hand to Hold in Deep Water, the muddy shore of a small, tourist-and-fishing island in the Outer Banks of North Carolina. The chores and smells of a onetime dairy farm in rural Maryland, where a pair of rusted, loose-hanging paddock gates are “straining against their hinges, skeletal vines clambering up over the iron bars. . . .” Is one of the startling descriptions.

The novel’s immersion isn’t only geographic. Shawn Nocher ambles comfortably into the local speech patterns and pungent metaphors of her characters, including Willy Cherrymill’s, who owns the dairy farm, and May DuBerry’s, his teenage wife, whose drunken father was a fisherman on the island.

As May describes her growing depression:

“I have been running after my own happiness ever since I first come up to Maryland, and it done always outrun me. Sometimes I get close enough to wrap my fingers round it, and I feel like I surely will not let it slip away. Then—maybe I squeeze too hard—but it goes right through my fingers like sand, and I got nothing left but grit-covered hands.”

The circumstances of Lacey’s modern life are literally and figuratively miles away from Willy’s farm—her career as an English professor, her complicated relationship with the Russian history professor who is Tasha’s father, and the clinical terms of Tasha’s diagnosis and treatment.

The two worlds meet when Lacey and Tasha come to stay for a few months at the farm, while Tasha undergoes chemotherapy at Johns Hopkins Hospital in Baltimore. To herself, Lacey concedes that she hasn’t visited her stepfather very much over the years, “not calling enough, not ever thanking him, until she needed . . . the buoying of Willy to hold her up” in her current crisis.

Midway through this impressive debut, the plot does a bait-and-switch. Tasha’s illness recedes, and instead, May moves to center stage.

Luckily, May’s story is much more fascinating. Tasha is, basically, fiction’s standard-issue little girl facing grave illness with adorable quirkiness. On the other hand, through May’s diary, Nocher sensitively unspools the way a young woman might be drawn into actions that to a reader would be unthinkable.

In fact, the book is in some ways too rich in plots. Intriguing threads are never followed up. For instance, Lacey briefly admits that “she is angry at Tasha for being sick,” but nothing further is said about that brave and unusual insight. There are also a lot of dangling ramifications of Lacey’s relationship with Tasha’s father, including the impact on Kat, his sullen teenage daughter from his marriage to another woman.

Perhaps the author, an award-winning short-story writer, will retrieve a few of those threads for a sequel. The literary world could use more tales of places other than New York City.