The Hand That First Held Mine 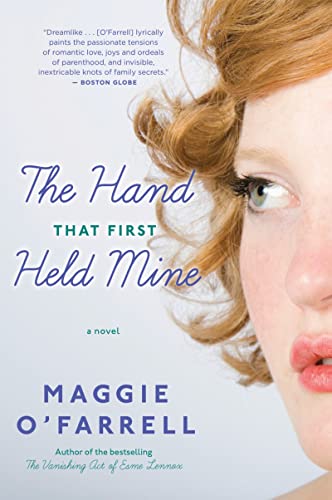 Lexie Sinclair’s mundane life during the early 1950s is about to take off like a rocket. Named Alexander by birth, called Sandra by her mother, she claims her new name given to her by Innes Kent, not more than minutes after meeting him. He is a charming British man, almost a decade older than Lexie’s eighteen years, and a character unto himself, as are all the players in this eccentric tale.

Love springs up between Innes and Lexie, as if from geysers and hot springs, as he introduces this bored country girl with big dreams to his world. It’s as if she’s come home at last. She drinks in the exotic nectar of artists and writers, an ethereal group that seems to drift above the reality of the masses. But the brightest flames are often snuffed out, as Lexie, acting as her own narrator in much of this unusual book, tells her readers. Writer O’Farrell thinks nothing of author intrusion, redundancies, odd metaphors, and adjectives—often switching tenses from one paragraph to the next. Yet she has moments where her writing is haunting, intriguing, almost an art form. Her story draws the reader into the complex lives of two different young women, fifty years between them, yet alike in so many aspects.

In a parallel story, Elina and Ted, living in present times, struggle to deal with the near fatal birth experience producing their son. The traumatic Caesarian delivery temporarily robs Elina, an artist, of her memory of both past and present. She is not yet famous, but not struggling either, and sees life through her hands and in her paintings—unlike Lexie, now a journalist, whose quick, observant mind conceives life from the branches of trees to the chaotic street life of the art district of London. Ted is a practical man, working in film production until his own memory heaves up images of his past—fast, distorted, and disconcerting as he struggles to make sense of his visions. The four might never meet but their lives will impact each other in a most unlikely scenario.

At the end of Part One of the book, a horrible incident occurs and in her omniscient way, O’Farrell drops it upon the reader as sudden thunder claps on an otherwise ordinary day. For Lexie, there will be no more of those, if in fact there ever were. Part Two picks up Lexie’s life without Innes and Elina’s struggle and worry over Ted. The plot begins to bubble and stir as the past insidiously creeps into the future.

Lexie, refusing to live with her off/on lover, Felix, finds herself pregnant and in “Lexie style,” has her baby alone, accepting only visits from the father of her child. Both women in the story experience difficult childbirth, yet are bound by intense love for their sons. But as Lexie foretold earlier in the story, she would not be around long, and Ted is soon without a mother by the age of three. As this odd mixture of stories and lives draws to a close, mysteries of the past are disclosed, taking the reader by surprise, and lending answers to Ted’s tortured soul.

O’Farrell’s tendency to avoid all rules of grammar and syntax seems to be deliberate on her part. While disconcerting at times—many times—her writing can read like poetry; as a result it’s hard to put this book down. Her descriptions of places, people, and events can be brilliant, full of insights into the human soul. Or, as Lexie says, “Everything she sees seems freighted with significance”—as is this book.

Reading The Hand That First Held Mine is like riding a roller coaster: never knowing what’s around the next bend, but anticipating a thrill; and when the ride is over, one wishes to buy a ticket for more of the same.