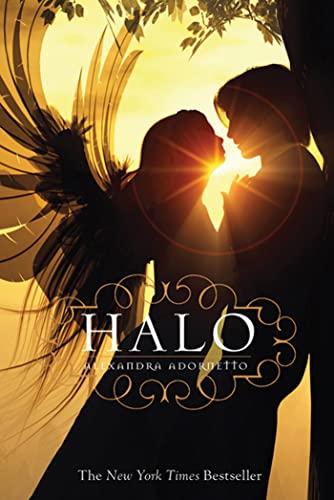 Halo is a young adult novel written by a young adult, eighteen to be exact, and by the looks of things, she has quite a career ahead of her. Alexandra Adornetto wrote her first book at age thirteen. She is an Australian native, and Halo is her U.S. debut.

The striking cover entices the reader to open the book and peruse the hidden treasures within. The cover art is rather amazing. It literally appears to glow; a flash of sunlight on the page looks so realistic that from every angle it appears iridescent.

Halo is the story of three angels that are sent to the Earth. Their assignment is to bring good to the world. They take human form and live as a family of siblings in a sleepy little beach town.

Gabriel, the elder, is a warrior angel. He’s not new to the game. He’s centuries old and knows his way around the Earth. Ivy the older “sister” is a healer. She too has been on a number of earthly missions and is well familiar with the pitfalls and problems in the world. The youngest, Bethany, is not sure what her special gifts are yet. She’s brand new, only seventeen and coming to the Earth is a first for her. She’s vulnerable, naïve, and perhaps worse of all, curious.

When Bethany meets Xavier on a stroll with her family, she’s warned to keep her distance from humans. When she meets him again upon his entering school, that’s not so easy to do. Bethany’s not sure she even wants to. Xavier is extremely good-looking—and that’s just the beginning. He’s a really nice boy, and he’s been hurt. How can she not feel for him? The feelings become mutual and before long, romance is in the air.

That is definitely not part of her mission. Bethany loses sight of what she is and why she’s here, but it has not been lost on the Agents of Darkness. She’s targeted—and so are those she cares about. The war has just begun.

Adornetto may be a young author, but she has a keen command of the written word and the ability to evoke vivid imagery. Perhaps this is the result of having two English teachers for parents. If there was any flaw in the book, it may be Adornetto’s propensity to be very descriptive, particularly when it comes to location and surroundings. This reader enjoyed it and relished the opportunity to indulge the imagination and picture the lush environs as described. Others may be tempted to skim the descriptions to get to the action, of which there was plenty.

This is the first book of a trilogy. The next installment is Hades, due in the Fall of 2011. Look for it. Doubtless it will be another winner.