Half the Kingdom: A Novel 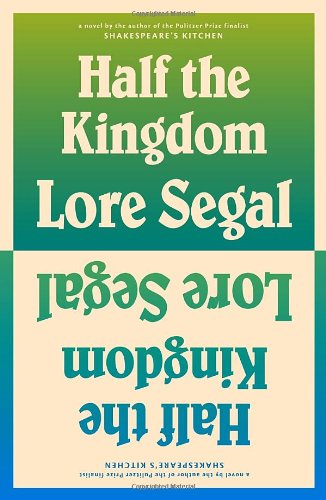 Eighty-five year old writer Lore Segal’s new novel Half the Kingdom is a darkly humorous yet unflinching look at the frustrations and indignities that accompany old age and at the relationships between the elderly and their adult children.

The novel’s episodic style, to which readers may have to acclimate, mirrors its elderly characters’ scatter brained cognition. Some of the chapters could stand alone as short short stories, and the novel initially resembles a book of linked short stories.

Joe Bernstein retired from directing a think tank called The Concordance Center shortly after 9/11 and since then has been living with an unspecified fatal illness. A decade later he rents office space on 57th Street in Manhattan where he creates a firm called Wide-Open Eye with the intention of publishing an encyclopedia entitled The Compendium of End-of-World Scenarios.

To staff Wide-Open Eye Joe hires his wife Jenny; their chronically complaining middle-aged daughter Bethy; their 75 year-old poet and short fiction writer friend Lucy Friedgold (who appears to be Ms. Segal’s alter-ego) but with emphysema and who is the widow of an epidemiologist who was a Concordance Center consultant; Lucy’s son Benedict (whose loyalty and filial piety is the very opposite of his Revolutionary War namesake); and Al Lesser, a computer specialist a generation younger than Bethy and Benedict.

When Joe stops breathing one day at the office the ambulance takes him to Cedars of Lebanon hospital where one of the ER doctors, Miriam Hadad, whose husband is head of hospital security, Googles Joe, and after Joe is released convinces the hospital to hire Wide-Open Eye to investigate a recent phenomenon: nearly all the patients 62 years and above, regardless of the initial complaint that brought them to the emergency room, develop dementia.

Joe suspects a diabolical plot by terrorists is to blame, but Dr. Haddad believes the stress of being a patient in an emergency room induces dementia in patients over 62. Joe and Lucy will check themselves in as patients to observe the situation from the inside, and Bethy, Benedict, and Al pose as social workers so as to interview the elderly patients.

Ms. Segal deploys the Wide-Open Eye ER investigation as a plot device to develop case studies and character portraits of the elderly patients who include: “Ilka Weiss and Lilly Cobbler, who have been translated into a gap in the world where nobody can reach them; . . . the nonagenarian, Anstiss Adams, started beating her caretaker, Luba; Luba keeps taking her clothes off; Francis Rhinelander believes himself to be living in a musical; Samson Gorewitz thinks he is dead; and each of his sisters, Deborah and Shirley, who can’t stop arguing; and Jack in his wheelchair, who cannot stop weeping.”

The elderly dementia patients are transferred to a different floor of the hospital, and Ilka calls to her daughter Maggie who replies, “‘Mom, I’m right here with you, Mom?’ but Maggie is speaking out of our common world from which no sound, no sign, no kiss, or touch of the hand reaches into the nightmare in which Ilka Weiss is alone with her terror . . . Now the ice age, presaged by the worm under her ribs, settles into Maggies chest. She thinks that she has crossed into another era from which she will look back with nostalgia to her life and to the things as they have been. Maggie is mistaken. The ice age in her chest will become the way things are.”

Not all the scenes in this novel are that grim. Ms. Segal describes a television commercial for “the Twice-Told®, a plastic headband with a built-in nano computer that translates the movements of eye and facial musculature of the person sitting across from you and tells you ‘You’ve told this story to this person before,’ before you have started telling it once again.” There is also a scene in which a character lists the things she likes about being old.

A recurring motif in the novel is Lucy complaining about a periodical editor who for seven months has not replied to or acknowledged her postal mail submission of a short short story and is not returning her calls. Technophobic Lucy doesn’t know that current practice is to submit literary compositions via email, that it is expected that authors will submit to multiple publications simultaneously while keeping a record of those submissions, and once the piece is accepted withdrawing it from the other publications.

Lucy is also an insecure writer who calls all her friends and reads her stories (two of her stories within the novel are quoted in their entirety) out loud to them soliciting their feedback. After reading one of her stories to her friend Katherine, “Katherine’s detailed, specific, accurate, high praise is what Lucy has been waiting her life long to hear, does not believe, and experiences as an act of hostility.”

Ms. Segal need not have any such insecurities about Half the Kingdom, which should be required reading for everyone hoping to reach his or her life expectancy and for the adult children of people who have already reached that age.

Now close the screen and call your parents (or other elderly relatives)!