Haldol and Hyacinths: A Bipolar Life 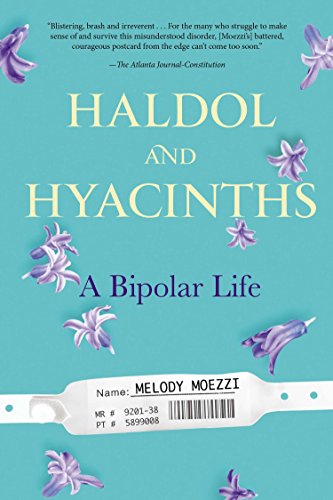 Intelligent, accurate, entertaining, culturally relevant, and a little sassy are words not usually put together in one sentence to describe a book about mental health.

They do, however, nail Haldol and Hyacinths: A Bipolar Life by Melody Moezzi.

This book is a courageous autobiographical work of her life as an Iranian American growing up in the American Midwest. As the title suggests, the primary theme is her experience of bipolar disorder, artfully written from within the disease by a person who lives it.

Ms. Moezzi gives excellent descriptions of the condition from its earliest beginnings to the various and changing states that ultimately led her to psychosis and multiple hospitalizations. Punctuating her story are several secondary themes also crucial to her maturation including:

—her lengthy bout of gastrointestinal symptoms which ultimately led to a diagnosis of a benign pancreatic tumor.

The text, engaging from the outset, is written in a readable style. Her descriptions of bipolar experiences are actual and factual. The text is dotted with profanity undisguised with asterisks, the speech typical of any verbal and headstrong teen or early adult. Rather than being offensive, this verbiage adds to the book’s authenticity and uniqueness.

Making use of analogy, the book describes puzzling and persistent internal mental feelings and ideas. Humor and sarcasm add to insightful assessments of other patients, professionals, and situations.

Without reading like a textbook, her engaging story also teaches in the context of the narrative. Serious suicidal fantasies and actions become interwoven into her struggle with the illness.

Despite ongoing outpatient therapy, she was ultimately hospitalized for depressive symptoms. Like so many individuals suffering from bipolar disorder, she was diagnosed with a unipolar depressive disorder and the bipolar aspects of her condition were missed. In all, it took 10 years for the bipolarity to be formally recognized—a statistic that unfortunately matches the national average.

Additionally delaying her mental health diagnosis was a serious medical condition, a pancreatic tumor. The tumor, too, was misdiagnosed initially as cancerous and was ultimately found to be a rare but benign tumor. In spite of this good news her recovery was painfully prolonged, requiring significant dietary changes.

Mental health practitioners know that it is all too common to have a mental diagnosis missed because the focus is too intent on the medical problems. At other times, family, friends, and even professionals make the assessment that “if you had this serious medical problem, wouldn’t you too be depressed?” They miss the underlying mood disorder and assume the mood problems will resolve when the medical issue is treated.

Even as her manic and hypomanic symptoms emerged neither Ms. Moezzi nor her caregivers recognized the condition. Impulsivity and elevated mood prompted erratic behavior such as driving from Atlanta to New Mexico on a sudden whim, entering a nightclub with a McDonald’s Happy Meal hidden in her bra, and spending $400 on totally unneeded groceries.

She became more grandiose and began to experience hallucinations. While retrospectively comically naïve and impractical, her notions and actions felt totally justified to her, as they do to most manic individuals.

To support the Obama presidential campaign she decided to raise funds by conducting a daylong Hula Hoop demonstration at the Democratic National Convention. “I discovered that no one had already come up with the idea. I mean was there any better or more obvious way to achieve world peace than by gyrating in place in an effort to keep a big ‘O’ swirling around your waist?” With the increased perspective of remission, she rightly says,” “the problem with mania—even the milder hypomania . . . is that you can’t distinguish genius from crap.”

In reading this book one cannot help but recall the award-winning performance by Claire Danes in the TV show “Homeland.” There are remarkable parallels between Ms. Danes’ fictional character and Ms. Moezzi’s real-life. Both highlight the cycle of the individual with bipolar disorder from being highly functional, productive, and intelligent for long periods, then hopelessly dysfunctional, especially when they go off medication. When this happens, no amount of verbal reasoning can reverse the delusional nature of their thoughts.

“Telling someone who is manic that she's manic is like telling a dictator that he's a dick. Neither is going to admit it, and both are willing to torture you to prove their points.”

My one critique of this book is one of emphasis and comes in the form of a warning to potential readers. Ms. Moezzi frequently discusses the foibles, errors, and incompetence of psychiatrists, mental health staff, and hospitals.

In addition, 70 pages are devoted to berating the behaviors of “professionals” that she encountered in her last several hospitalizations. This is followed by 10 pages describing her ultimate improvement, relative stability, and useful relationship with a psychiatrist who in an understanding way “got her.”

There is little doubt that her descriptions are accurate in her situation, but it may give the reader the notion that this is the course of most or all psychiatric treatment and hospitalizations. While there are substandard practitioners and placements, there are many competent qualified ones as well. The somewhat disproportionate emphasis on the negative undermines the ultimately hopeful and positive outcome of the book and of Ms. Moezzi’s life to date.

There are many books currently available on bipolar disorder. Some are autobiographical, others are textbooks, and still others are “how to cope” manuals. All are necessary and useful.

Haldol and Hyacinths fills an important and heretofore unfilled niche. In addition to being an engrossing story about a bicultural life combined with physical and emotional illness, this book is written in a humor-filled, irreverent style that will appeal greatly to teens and young adults who may have bipolar disorder or its symptoms.

Likewise it would be excellent for families of these individuals to embrace a sense of what their relatives are experiencing internally. Haldol and Hyacinths is highly recommended, and beyond its story value will prove a useful and educational tool.