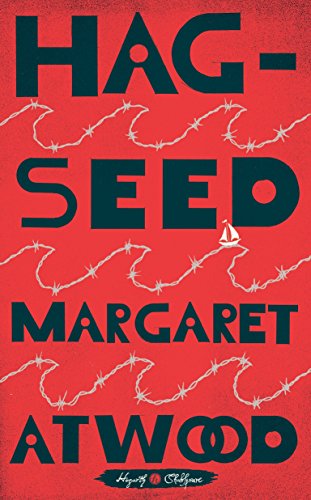 That word is effective.

And while, on the surface, that might seem a less stirring adjective than powerful, say, or evocative, our stolid little word effective is meant to be highly complimentary, most especially given the circumstances of Hag-Seed’s birth.

Atwood’s book is the latest in a line of novels, each of which evokes the spirit of one of Shakespeare’s plays. And its author has been asked to update the theatrical work in some way, making it perhaps more relatable to the modern audience, while, in some between-the-lines way, referring back to the play often enough, directly or obliquely, to hopefully make the reader more likely than not to return to the source material in some form or other and thereby rightly celebrate the greatness of the Bard’s works and perhaps help them find their new niche in our point-and-click culture.

As the publisher, Hogarth Shakespeare, an imprint of Penguin Random House, puts it:

“For more than four hundred years, Shakespeare’s works have been performed, read, and loved throughout the world. They have been reinterpreted for each new generation, whether as teen films, musicals, science-fiction flicks, Japanese warrior tales, or literary transformations.

“The Hogarth Press was founded by Virginia and Leonard Woolf in 1917 with a mission to publish the best new writing of the age. In 2012, Hogarth was launched in London and New York to continue the tradition. The Hogarth Shakespeare project sees Shakespeare’s works retold by acclaimed and bestselling novelists of today. The series launches in October 2015 and to date will be published in twenty countries.

Thus, Margaret Atwood might have found herself more boxed in than usual in attacking the project.

First, because it is a work adapted from another, more established work, and, second, because its specifically Shakespeare, and not only Shakespeare, but The Tempest, one of Shakespeare’s best known and most admired works, the inevitable comparison to which would cow most modern authors.

Happily Margaret Atwood is more than up to the task, and Hag-Seed proves to be a joyful thing, a wonderfully richly literate thing, and, most important, an effective thing. Because Hag-Seed is every bit as good as its title.

It evokes; it intrigues. And it has been created in such a way that it is every bit as enjoyable for the wizened reader who has spent a lifetime loving The Tempest, from the storm at sea to the breaking of the wizard’s staff, as it for the Mirandas and the Ferdinands among its younger readers, who have never yet studied their Shakespeare.

The reader can only imagine how many classroom debates and/or term papers will be fired off in order to compare/contrast Atwood’s work with Shakespeare’s. And the fact that Atwood’s stands up so very well in comparison is proof of what an effective piece of writing it is.

Indeed, excepting a rather annoying mashup of Miranda and Ariel right at the end of the thing, the other word that comes to mind in thinking over Atwood’s characters, language, narrative and smooth, silky, Tempest-y adaptation is splendid.

Atwood’s Tempest starts with its tempest past. With its Prospero brushing his teeth:

“’Mi-my-mo-moo,’ he tells the toothpaste-speckled mirror over the kitchen sink. He lowers his eyebrows, juts out his chin. Then he grins: the grin of a cornered chimpanzee, part anger, part threat, part dejection.”

Felix Phillips had climbed the ladder at Canada’s Makeshiweg Festival to become its Artistic Director, a position from which, as he surveyed his turf from the stage into soft darkness of the seats beyond, he concerned himself with his “higher aims:”

“To create the lushest, the most beautiful, the most awe-inspiring, the most inventive, the most numinous theatrical experiences ever. To raise the bar as high as the moon.”

Felix, you see, is an artist. A director of deep insight and yummy instincts. His productions garner mixed, if respectful reviews and inspire solid subscriptions and polite, if confused audiences. He is a risk taker to boot (“the almost-naked, freely bleeding Lavinia in Titus was too upsettlingly graphic”); all of which means that he is totally expendable.

And so, the “rightful director” of the Makeshiweg Festival is toppled by is own assistant, Tony and shoved into exile:

“How he has fallen. How deflated. How reduced. Cobbling together this bare existence, living in a hovel, ignored in a forgotten backwater; whereas Tony, that self promoting, posturing little shit, gallivants about with the grandees, and swills champagne, and gobbles caviar and larks’ tongues and suckling pigs, and attends galas, and basks in the adoration of his entourage, his flunkies, his toadies…

“Once the toadies of Felix.

Of course, the play that Felix had been preparing for the festival stage was The Tempest. And among the few possessions he allowed to take with him as he packs up his car to drive away into his artistic exile are the Robe of Many Creatures (made up of stuffed animals of all sorts, unstuffed and sewn together) and walking-stick wand that his Prospero was to employ. They will come in handy later on.

That Felix, whose world, like all those others worlds of other characters in Shakespeare’s plays, plunges into chaos, will, by novel’s end, find himself in a state of “order restored” is a given, in that we are being presented with a reenactment of The Tempest here, as well as a concurrent production of that same play staged behind the bars of the Fletcher Correctional Institution that is being overseen by a man bearing a very strong resemblance to Felix himself, although, throughout his long employment at the prison, he has been known as “Mr. Duke.”

In addition, given that fact that over these long years Felix has grown older, haggard and bearded, he has cast himself in the role of Prospero, Shakespeare’s rightful Duke of Milan, who, after being exiled to a small, magical island, conjures the tempest at sea that drives the men who wronged him (who, happily, were floating by on a ship that came just close enough to the island to sweep them ashore) into his vengeful arms.

The fact that, in our novel, a very similar thing happens to Felix should come as no surprise to those who have been paying any attention at all.

The beauty of Hag-Seed is that the plot sings, the Shakespearean references zing and everything comes out right in the end.

Hag-Seed (the title’s a reference to Calaban, whose presence looms large) succeeds on every level. It is both a skillful tribute to one of Shakespeare’s final and most skillful plays and a novel that stands beautifully on its own—an utterly enjoyable, endearing and effective work of art. It is a perfect addition of the Hogarth Shakespeare canon.