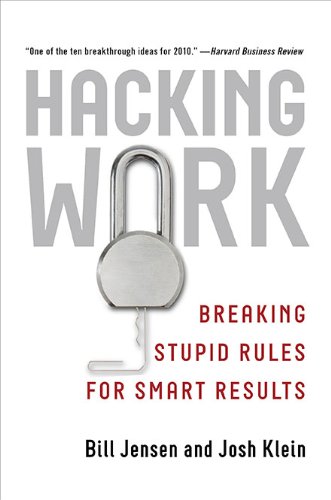 It was Tom Peters who started the business book boom.

Back in 1982, Peters and his co-author Robert Waterman, unknown McKinsey consultants, conducted a study on quality practices in American businesses. They then wrote a decent book about the category leaders and what made them so good.

Their book, In Search of Excellence, became a business bestseller and Peters achieved guru—no, rock star—status with the denizens of the Fortune 500. Excellence also lit a bulb over the publishing industry's head: Business stiffs were hungry for stuff about themselves.

The floodgates opened and the business book market exploded. As time passed, it divided and sub-divided, with publishers micro-targeting audiences and issuing books focused on any bit of arcana floating in the workplace.

For example, there have been umpteen books about getting around the “system” when you work in a corporation. Robert Townsend’s Up the Organization was one of the first with been plenty more since then. What possible new angle on Mammon’s gold earth could there be for another book on this subject?

Simple. You just rename the process for your latest generation of readers. Instead of bypassing rules, you hack them because you’re the digiterati of Generation Y—to whom Bill Jensen and Josh Klein, authors of Hacking Work: Breaking Stupid Rules for Smart Results, repeatedly tip their hats.

Jensen and Klein define hacks as the “cheat codes” for work and classify them as “soft” and “hard.” Soft hacks change working relationships. In the old days, it was called managing up, down, and across the chain of command. Now it’s, well, the same thing but it’s a soft hack.

Hard hacks change things. At one time, when a system wasn’t working correctly, you might gather a team and use techniques from Six Sigma or quality control to fix it. Now, in a blaze of cunning and technology, you apply a “hard” hack to work around the malfunctioning process to get what you need.

Jensen and Klein have unlimited faith in the tools of the computer and web to cut through red tape and circumvent any rule. Like the guy who whispered “plastics” to Dustin Hoffman in The Graduate, their tone is confident and evangelical—a “let’s roll” approach to battling the dumb conventions of upper management and the IT/HR departments using things like g-mail, wikis and instant messaging as weapons.

But each business generation embraces its present technology as the balm for all its woes. The real problem may simply be the nature of the corporate structure—it was a design fine for the small guilds of old Europe, but not so great when it grew into conglomerates like ITT and GE.

Since hacking seems to be equal parts feral cunning and clever improvisation, it doesn’t lend itself well to structure and modeling. As a result, Hacking Work is a tough slog, darting and weaving all over the place. There are myriad anecdotes, odd attempts at quantification (“out of four thousand hacking cases we reviewed, there is only a 0.075% chance of getting fired”), lists upon lists, and many, many declarations of independence from the “old way” of doing things.

Like cotton candy, however, there is little to grab onto in the way of systemic improvements; instead, it’s every man for himself according to the authors’ corporate paradigm.

Yet in the Jensen-Klein vision of business life, things happen magically, as if Peter Drucker were cross-bred with J. R. R. Tolkien. Don’t like the way you have to do expense reports? Then cut a deal with your buddy in finance who smoothes the way to easy bookkeeping. Job description not to your liking? Crack the database that holds your personnel records and change the objectives.

In effect, the authors advise people to just follow their inner Judge Judy, because the assumption is that company rules are mud, employees are benevolent ninjas and unintended consequences simply don’t exist.

Thus, in Hacking Work, businesses exist, not for the benefit of the customer or shareowner, but for the happiness of employees. Only the workplace, rather than the marketplace, is relevant—an odd return to the bad legacies of organized labor. Where unions lard their contracts with hundreds of work rules to protect workers from management, the new Gen Y hackers work the corner pockets and side angles of the system—invisibly, so it seems—to get what they need out of the job.