The Habsburgs: To Rule the World 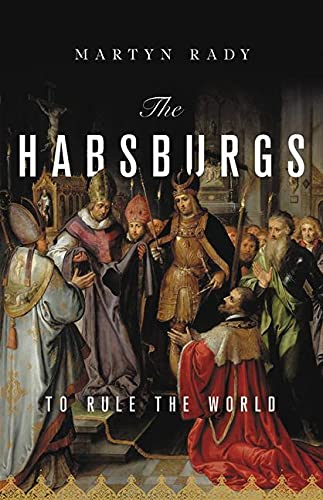 “new, concise, and highly readable history of the Habsburgs . . .”

One of the many important consequences of the First World War was the collapse of the Austro-Hungarian Empire, which comprised the last remnants of the once great Habsburg Empire. In the 16th century, the Habsburgs ruled the world’s first truly global empire, which included vast territories in Central Europe and the Balkans, parts of Italy, Sicily, Sardinia, the Low Countries, Spain, England, Ireland, parts of India, Japan, and China, and vast territories in the New World.

Professor Martyn Rady’s new, concise, and highly readable history of the Habsburgs traces the rise of that remarkable family from the late 10th century, when they possessed a few villages of the Upper Rhine region near today’s border between Germany and France and parts of northern Switzerland. The family’s accumulation of land was gradual, resulting from marriages, inheritances, war, and good fortune.

Rady notes that the seeds of the Habsburg Empire were planted by Albert I in the late 13th and early 14th centuries. The Habsburgs laid claim to Austria, and Albert fathered 21 children, several of whom married into “the royal and princely houses of France, Aragon, Hungary, Poland, Bohemia, Savoy, and Lorraine.” But Rady calls Rudolf (1339–1365) the founder of the Habsburg dynasty because he gave the family a “historical consciousness and a set of beliefs about themselves” and he “inspired a sense of solidarity and purpose among his successors that became more embedded with the passage of each generation.”

Habsburg rulers aspired to the title of Holy Roman Emperor and envisioned their destiny as the rule of the world and the spread of Roman Catholicism. Under Maximilian in the 15th century, the Habsburg Empire was, Rady writes, “transformed from a middle-rank Central European dynasty to the premier power in Europe next to France.”

Habsburg power reached its zenith, however, under Charles V and Philip II. Charles V waged war against France, fought the Ottoman Empire and North African Arabs, and achieved victories over Protestant princes. Under his reign as Emperor of Spain and Holy Roman Emperor, the Habsburgs also achieved mastery in the New World.

Charles V abdicated in 1555 and retired to a monastery in Spain. His son Phillip II expanded the empire and zealously promoted the Catholic faith. He led an alliance of Christian European states to resist Ottoman power, culminating in the famous Battle of Lepanto. He tried, but failed, to conquer England with the Spanish Armada (an event that Rady inexplicably ignores).

Meanwhile, the Austrian branch of the family fought religious wars in Central Europe, culminating in the Thirty Years War (1618–1648). Rady calls this conflict the first global war. It was, he writes, “the first war to involve the entirety of the European continent.” It also spread to Africa, the Indian and Pacific Oceans, and the New World. There was fighting on Taiwan and Manila was blockaded. The war featured great generals such as Wallenstein, Gustavus Adolphus, and Ferdinand III.

The Treaty of Westphalia in 1648 ended the war and began the slow decline of Habsburg power. France under Louis XIV next threatened European hegemony, and the Habsburgs joined coalitions of lesser powers to restore the balance of power on the continent. Habsburg Emperor Leopold I allied with Britain, and his general Eugene of Savoy joined with Britain’s brilliant general Marlborough to defeat the French at Blenheim (1704) during the War of the Spanish Succession.

In the next century, though declining geopolitically, the Habsburgs under Maria Theresa and her son Joseph II, who ruled together and separately from 1740 to 1790, reformed governmental institutions within the empire. Rady calls their achievements breathtaking: “a thorough military and fiscal reform, and the establishment of institutions that communicated the ruler’s will through newly appointed local governments and districts.”

There were still wars to fight—the War of the Austrian Succession, which ended in 1748, and the Seven Years War (1756-1763). Every war was costly in troops and money, and sapped Habsburg power.

Rady’s history goes beyond geopolitics. He highlights Habsburg promotion of culture, science, and architecture. He discusses reports and studies of vampirism within the empire. He relates the impact of Enlightenment ideas on Joseph II, who promoted religious toleration and sought to abolish serfdom.

Napoleon’s rise in France and throughout Europe brought the Habsburgs into new coalitions to oppose French hegemony in the late 18th and early 19th centuries. Emperor Francis II appointed Clemens von Metternich Austrian Foreign Minister, and after Napoleon’s defeat at Waterloo Metternich along with Britain’s Lord Castlereagh, France’s Talleyrand, and Russia’s Tsar Alexander I diplomatically restored the European balance of power at the Congress of Vienna.

Rady effusively praises Metternich’s diplomatic achievements. “[H]e gave the . . . Austrian Empire a commanding position” in the center of Europe. “The borders that Metternich helped draw up in Vienna in 1814–1815,” he continues, “. . . survived to the extent of forming the broad outline of the European state system until 1914.” While Europe suffered four short wars during that hundred year period, Metternich “gave Europe the foundation on which its statesmen might choose peace if they wanted it.”

The revolutions of 1848 affected Austria as “[m]obs looted shops and workplaces in the suburbs [of Vienna], assaulting the well-to-do . . .” Political instability spread, but was ultimately contained by force, including by outside powers.

Franz Joseph ascended the throne in 1848 and ruled until his death in 1916. Rady calls his conduct of foreign policy “calamitous.” His indecision led to Austria’s diplomatic isolation in mid-century. He lost a short war against a rising Prussia governed by Bismarck. With German unification in 1871, the Habsburgs receded to a second-rate power.

In 1867, the Hungarian part of the empire received its own government. It was now called Austria-Hungary. The Habsburgs maintained overall control of foreign policy for both parts of the empire.

The rise of nationalism in the late 19th century further weakened Habsburg rule, especially in the Balkans. Franz Joseph’s response was what Rady calls “bureaucratic absolutism.” Meanwhile, Bismarck’s European order did not survive his retirement in 1890. Without Bismarck’s skillful management of the European balance of power, the great powers drifted toward war.

Before he retired, Bismarck remarked that the next war would result from “some damn foolish thing in the Balkans.” Serbian nationalists assassinated the heir to the Habsburg throne on June 28, 1914, igniting the war that would cause the break-up of the Habsburg Empire.

The empire lost a million dead and nearly two million wounded, with more than a million taken prisoner in World War I. The war produced starvation and rationing and workers’ strikes. In the end, Rady writes, the Habsburgs fell from power because they “had tied their fate to Germany.” “The glue of the dynasty,” Rady explains, “had been found thin, and by 1918 it was insufficient to hold the parts together.”

The American diplomat and historian George F. Kennan once wrote that in looking back on 20th century history all the lines of inquiry lead back to the First World War—what he called the “seminal catastrophe” of the 20th century. Today, we are still dealing with the consequences of the collapse of the Habsburg Empire and the end of the old European order. Rady concludes that even though the empire is gone, the Habsburg’s legacy survives in architecture, art, natural history, and “a vision that combined power, destiny, and knowledge, and blended earthly and heavenly realms in a universal enterprise that touched every aspect of humanity’s temporal and spiritual experience.”