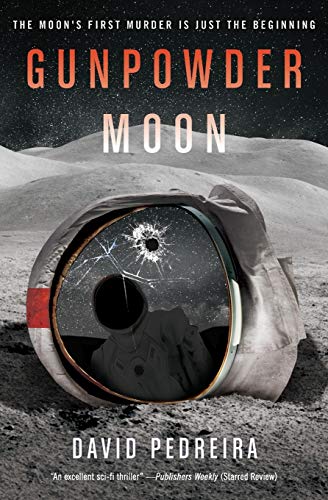 “page-flipping race to see who survives and who dies on the lunar surface . . .”

This debut novel does an excellent job of merging science fiction, mystery, and thriller genres into an engrossing page turner. Reminiscent of the classic Ben Bova Kinsman series and the early works of Allen Steele, the author immerses the reader into the sights, smells, and sensations of living, working, and ultimately dying on the lunar surface in the near future.

The personalities and quirks of the set of misfit miners that form the station team are well done, and the inner demons of Caden Dechert, the protagonist, will particularly resonate with anyone who has faced an unpleasant series of choices in an environment where you can’t tell friend from foe. The characters immediately draw you in as sympathetic figures in over the heads in a plot they don’t want to be a part of, but are unsure how to stop.

The plot starts ratcheting the suspense up right away, and the author keeps plenty of uncertainty going about the murder and underlying conspiracy (no spoiler’s here) right up until the plot twist at the end of the book. Readers who like solving a “who-done-it?” mystery will enjoy trying to piece together the evidence and motives of the characters in the book. Safe to say, the author uses plenty of misdirects and surprises to keep the reader thinking they have it all figured out, until the end, when the truth will be revealed.

Pedreira’s style and fabulous descriptive language really make the moon almost a character in this book, and the strange bond his characters have with their adapted home and calling as lunar miners is really well done. The ability to bring the sights and smells of the lunar surface (hence the title) really speak to the author’s ability to integrate the scenery and science of space travel without overwhelming the plot and conflict.

After the major plot twist and resolution of the conspiracy, the final part of the book (again, no spoilers here) really turns into a page-flipping race to see who survives and who dies on the lunar surface in a race against time and mayhem.

The book ends with a satisfactory resolution, if not a particularly complete one that will satisfy a reader’s sense of justice or payback. Needless to say, this just adds to the authenticity of the book where the good guys rarely completely win and the guilty often escape their just punishment.