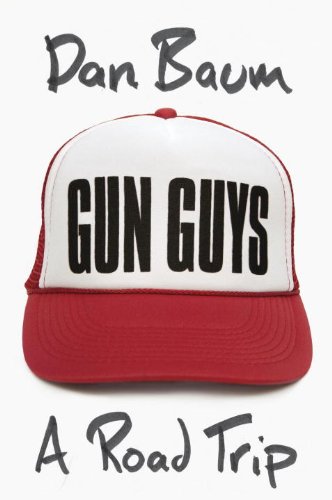 “Gun Guys is smart and informative—an education for anyone the slightest bit curious about why gun owners are so passionate about their guns.”

In the wake of the massacre in December 2012 of 26 children and adults at Sandy Hook elementary school in Connecticut by a man with an assault rifle, it would seem impossible to have a civil conversation about guns and gun ownership.

Surprisingly, Dan Baum’s Gun Guys: A Road Trip, takes the discussion of guns to unexpected amiable territory. He writes about guns from a personal perspective, taking the stance that they are a sporting item and require a certain amount of expertise much like those who like to shoot a bow and arrow.

Mr. Baum begins his tale of gun fascination from when he was elementary school age in 1961 and attended Sunapee summer camp in New Hampshire. He said he was a “pudgy, over mothered cherub amid a tribe of lean savages.” Learning how to shoot guns at camp made him special. He was a good shot, and this expertise won him a bronze Pro-Marksman medal from the National Rifle Association. He got a patch his first year at camp and every year after that.

But had no mentors among his friends or family members who shared his interest in guns. As someone outside the world of avid, pro-gun-rights gun owners, Mr. Baum decided to take to the back roads of the U.S., visiting many gun stores, rifle ranges, and gun shows to find what lies behind the powerful allure of guns for others.

Not fitting the stereotype, Mr. Baum knew he’d butt up against some barriers. He describes himself as a New Jersey Democrat now living Boulder, Colorado, a bastion of liberal pacifists. “I’m a stoop-shouldered, bald-headed, middle-aged Jew in pleated pants and glasses.” He used his NRA baseball cap and NRA lapel pin as camouflage to try to fit in more.

He started his research by going out in public wearing an “open carry” gun strapped to his hip for everyone to see. He was looking for reaction from ordinary folks.

His first stop was a Home Depot. He made every effort to be obvious, but he got no reaction—positive nor negative.

Next stop was the local Apple Store. Surely, he wrote, that would cause a response from the technology folks. Again, no reaction. Finally Mr. Baum steeled himself to enter Whole Foods. Clearly the clientele from such a store would have something to say.

Mr. Baum said he felt like a ghost. Or was there some sort of weird psychological tic preventing the Whole Foods customers from seeing the gun because it was too outrageous to be true, e.g. “This is Boulder; that can’t be a gun.”

His next move was taking the course to get a permit for carrying a concealed, loaded weapon. His instructor stressed the importance of assessing certain “Conditions” for people wearing loaded guns.

Condition White stood for total security: home with the dog at your feet and your home alarm on.

Condition Yellow stood for being aware of one's surroundings, such as walking around town.

Condition Orange was awareness of a possible threat.

Condition Red was responding to a real threat.

Mr. Baum wrote, “I found that I wasn't so much in Condition Yellow as Condition Day-Glo Yellow. Everything around me appeared brilliantly sharp.” Mr. Baum's hyper awareness spilled over into his reaction for those walking around him. He described the feeling of pity he felt for passersby who did not know he was capable of wreaking havoc at any moment.

“And there I was, striding among them, uniquely capable of resisting whatever violence might be their portion. It surprised me that it made me feel rather noble.”

Dan Baum made a rule not to let himself not get drawn into political discussions, and he kept his promise when he wrote the book months before the events of Sandy Hook and its initial publication. He said his mission was finding out who else besides himself was a self-styled “gun guy” which he did well.

However, he did venture in to the world of politics in a postscript he wrote after the events of Sandy Hook.

In the same reasonable style as in Gun Guys, Mr. Baum points out that things have to change in the way we manage, or mismanage, gun sales in this country. He wants to see more control on how guns make their way into the world of criminals and criminal behavior.

The appeal of this book is Mr. Baum’s approach to gun ownership. The skeptical reader will be surprised. He does not preach the second amendment nor argue for or against the value of gun ownership. He leaves that up to his audience.

Gun Guys is smart and informative—an education for anyone the slightest bit curious about why gun owners are so passionate about their guns. Dan Baum’s stories are alive, engaging, and earnest.