The Guilty (Will Robie) 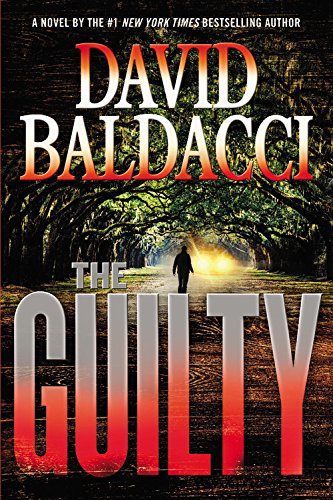 Dysfunction, a disease that affects families everywhere, is the basis of David Baldacci’s latest crime thriller The Guilty.

His hero, Will Robie, faces his devils when he fails to complete an assignment and while taking aim at a target, accidently kills not only the target, but also that target’s little daughter. Distraught over the failure, he finds himself unable to do away with his next target. Not sure where his life and CIA employment may be headed, Robie is made aware of another crisis in his life when his boss, the Blue Man, informs him that his father has been arrested and charged with murder.

Although estranged from his father for 20 years, Robie agrees that it may be time to return to Cantrell, Mississippi, to clear his head and face his devils.

Upon his arrival home, he quickly discovers that his father wants nothing to do with him and refuses to see him. Upon learning that his father had, over two decades, grown his law business and moved into the role of judge, Robie is more convinced than ever that his father was not a murderer. He also learns that his father bought The Willows, an estate long owned by the multi-generational Barksdale family that sold the estate and dramatically disappeared from Cantrell with no forwarding address.

This information is a double shock since Robie had been in love with his high school sweetheart, Laura Barksdale. After high school, Robie’s plans to leave Cantrell far behind included taking Laura with him, but the plan went awry when she did not show up at their planned meeting place.

When Robie goes to The Willows he is confronted with another puzzle—his father’s second wife Victoria, many years younger than he, and his three-year-old son, Tyler. Victoria invites him to stay at The Willows as he attempts to unravel his father’s murder charge.

The town of Cantrell is not terribly interested in having Robie in the neighborhood, and it is not long after his arrival that the violence begins. Robie befriends the local Deputy, Sheila Taggart, whom he calls upon for assistance when the first attack occurs. His skills as a CIA operative are put into play and fortunately for him no one realizes exactly what he does for a living, giving him the advantage of surprise.

As Robie digs deeper into the charges against his father, people begin dropping, and Robie calls upon the Blue Man to help sift through the information he is unraveling. One of the aids sent by the Blue Man is Robie’s partner, Jessica Reel, an operative equal to Robie in every way.

As Reel and Robie dig into the muck and mire of Cantrell’s secrets, they follow a trail of murders like nothing ever encountered in the small Mississippi town. They survive tense conflicts, and once the dust settles, there are many violent deaths—some deserving, some not.

Enter the FBI, searching for a serial killer, whose trail has led them to this sleepy town. Add to that a pedophile, a blackmailer, incest, and rape, and Robie and Reel have their hands full unraveling this knot. And as their search continues to turn over years of dirty laundry, Robie is haunted by the ghost of his lost love Laura when the spirit of the Barksdale family begins to rise with each new clue.

Baldacci lays out the clues like cookie crumbs: to be followed regardless of what direction they lead. His murder scenes are neatly placed with a comfortable distance between each, and yet these scenes raise the tension of the story and keep it moving at a good pace. His clues and foreshadowing are done well, and by the end of the story the reader can go back a see the transparency that he applies to these clues when Robie picks up on them and puts each piece of the puzzle into its proper place.

A small side story occurs when Robie visits an old high school football teammate, Billy Faulconer, who is dying of cancer. Billy’s son, Little Bill, has computer skills that come in handy to Robie and Reel, and by the end of the story, one gets the sense that future Will Robie stories may include this bright character.

Dysfunctional stories notwithstanding, The Guilty comes to a satisfactory end with most of the wrinkles ironed out. Baldacci has produced a good, solid, page-turner that was fun to read . . . in a very short time.