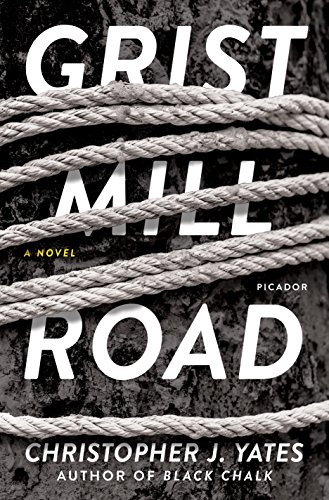 “Yates crafts a tough look at what trauma can do to adults, and how personal connections between people and their timelines can cause as much malice as mirth.”

Memories from childhood have a funny way of twisting and turning, of reshaping and reforming. This is why we so often remember our halcyon days of bicycles, lazy summers, and best friends so incorrectly. However, it is safe to say that very few of us had a childhood quite like the one that brought together three very different people in the bad summer of 1982.

Christopher J. Yates’ thriller novel Grist Mill Road is all about how the past, or rather the malformed past, can impinge upon the present. This story constantly shifts back and forth between 1982 and the dark days of the Great Recession in 2008.

Similarly, the novel’s three main characters—Patrick McConnell, Hannah Jensen, and Matthew Weaver—all take their turns telling the same story. As in real life, each person has their own variation, their own revelations about what happened on August 18, 1982, in the small upstate village of Roseborn, New York.

On that day, Matthew used rope to tie Hannah to a tree and shot her over 30 times with a Red Rider BB gun. The final shot tore out one of Hannah’s eyes. Patrick stood beside Matthew for most of this assault and did next to nothing.

Over a decade later, Hannah, a crime reporter for a New York newspaper, and Patrick, a food blogger recently fired from a large financial conglomerate, are a married couple living in the city. The pairing does not sit well with everyone, but the couple seem fairly happy. That happiness hits its nadir when one fan of Patrick’s blog turns out to be none other than Matthew. All three eventually return to Roseborn as the true context of what happened on that summer day becomes more and more clear.

Yates’ story unfolds slowly and is told with loving care. All three characters (plus New York City Police Department Detective Mike McCluskey, a fatherly friend of Hannah’s) are thoroughly human and somewhat humane. Even Matthew, the supposed villain of the novel, is not a figure of evil. He had reasons for doing what he did back in 1982. Indeed, Grist Mill Road shows that the shooting of Hannah was the lesser crime committed by Matthew that summer, but even in that instance more than a few readers will see Matthew as completely justified.

Despite all of Yates’ hard work in terms of character development and storytelling, Grist Mill Road has two noticeable weaknesses. First of all, Patrick, otherwise known as “Patch” and “Tricky,” is not as fleshed out as he could be. In fact, by the novel’s midway point, Patrick’s actions seem to come out of the blue, almost suggesting that the seemingly innocent food blogger is actually psychotic. To be sure, we all go a little mad sometimes, but Patrick’s uptick in violence cannot be easily explained away by the personal misfortune that he suffers. Guilt makes for a compelling cause, but this is not totally satisfying either.

The final issue here is the book’s big reveal. One word, it seems, caused Matthew to snap. This word was uttered by one of his victims. Again, Matthew’s backstory makes his gruesome decision logical, but one ugly word as the true black seed of violence is a hard thing to swallow, especially since it turns one victim into something less than innocent.

Grist Mill Road is a thoroughly enjoyable thriller novel that contains all the complexity and abstraction of real life. This is not a neat potboiler. Yates crafts a tough look at what trauma can do to adults, and how personal connections between people and their timelines can cause as much malice as mirth.