The Grifter's Club: Trump, Mar-a-Lago, and the Selling of the Presidency 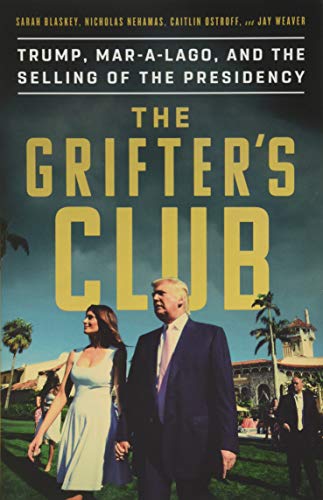 “The Grifter’s Club will appeal to political junkies who can’t get enough of the present national moment.”

Ah, for the old days of the Winter White House at Camp David, where presidents from FDR to Obama relaxed in cool mountain air and met in seclusion with foreign dignitaries to settle historic matters of war and peace. Now, we have Mar-A-Lago, a boisterous gilded palace in wealthy Palm Beach, Florida, where Donald Trump “holds court with an odd assortment of billionaires and crooks, conspiracy theorists and political fixers.”

While turning the pages of this brisk account by four Miami Herald reporters, one can almost hear the distant chants of hard-core MAGA supporters (Fake news!) Alas, The Grifter’s Club contains little news of any kind. We have been here in spirit for several years now, amid overdecorated rooms brimming with imported stone and draperies, and peopled by the same tiresome suspects.

It’s just another place where Donald Trump rules “with an iron fist.”

Close your eyes and imagine the current president at home here. Sheets of 24-karat gold cover walls and ceilings of the 17,00-square-foot Donald J. Trump Grand Ballroom, at a cost of $7 million. Lit by 17 crystal chandeliers ($250,000 each), it has the feel and look of Louis XIV’s Versailles—“and that’s my favorite style,” says Trump. Look, there he is, seated in a place of honor, surrounded by wheeler and dealers—the “used-car salesmen of politics—hoping their proximity to the commander in chief will “bolster their own brands.”

Sorry, this book’s considerable attitude rubs off on a reviewer. Based on their own reporting of the past several years, the authors take us into a mind-boggling presidential home/retreat open to anyone who can meet initiation fees of $200,000 and up, payable to the Trump Organization. They recount the history of the compound, built by cereal heiress Marjorie Merriweather Post in the 1920s, and the reaction of Palm Beach society when Trump bought the property in 1985.

Reserved Mayflower matrons were mortified to find their new neighbor was “a tabloid-chasing womanizer, a tasteless vulgarian.” They “clutched their pearls” over this “paparazzi-chasing Queens developer” seeking to upset their social order. Many locals—especially new money—eventually signed up as club members anyway, drawn by the excitement of ritzy galas, colorful characters, and a charismatic president.

Unlike the real White House, this one keeps no visitor logs and keeps the Secret Service on a tight leash. As one staffer remarked, “Literally anyone could walk in. Anyone.” And they do, including uninvited Chinese individuals like business woman Yujing Zhang, a trespasser with many electronic devices, who was arrested and deported.

Said a former White House official, “Everyone who is angling for something knows to be there.” That has made Mar-A-Lago a “favorite haunt” for groups backed by casinos, energy companies, and other special interests, write the authors.

Their gossipy narrative details “ruthless networking” and machinations of members and guests. Guido Lombardi, a member from Italy, political fixer for the European alt right, and longtime friend of Trump, tried to use the club to prevent North Korea from becoming a rogue nuclear state. Others come peddling one enthusiasm or another to the ever-receptive Trump, “an opportunist ready to jump at any enticing prospect.”

The Grifter’s Club abounds in such goings on, none of it likely to surprise any sentient being, as well as tidbits on inner-circle club members (William Koch, Patriots owner Robert Craft), errant chefs, and visitors from boxing promoter Don King to Republican National Committee fundraisers.

There’s also discussion of violations of the emoluments clauses of the U.S. constitution—anti-bribery rules that prohibit the president from profiting off foreign and domestic governments. Many governments pay the Trump Organization for the use of lavish guest rooms and facilities. Hence the subtitle’s “the selling of the presidency.”

The Grifter’s Club will appeal to political junkies who can’t get enough of the present national moment.