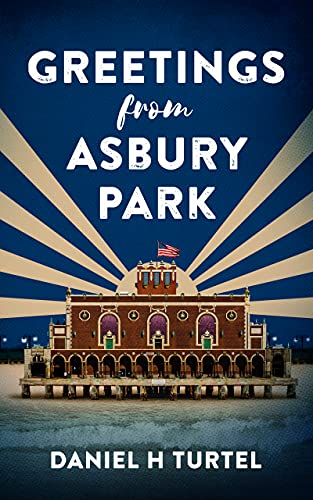 “a pithy, enjoyable, modern-day story from start to finish, with a cast of fully realized characters you’ll champion to the end.”

The sphere of activity in Daniel H. Turtel’s Greetings from Asbury Park epitomizes character as place, vacillating along the New Jersey shore between Asbury Park, Deal Lake, and Long Branch, in a vivid and vibrantly described setting. “The boardwalk followed the sand from the northern tip of Asbury Park all the way south to Belmar and beyond—a stretch of more than three miles before the Shark River Bridge interrupted it.” On the boardwalk’s half-mile commercial strip between Convention Hall and the Casino, “there were restaurants and bars all down the strip . . . and it was always busiest in the summer.”

It is the summer of 2016, and affluent Joseph Larkin is dead. A philandering, self-serving, unlikable man who lived in a Long Branch estate, he, seemingly for the sport of creating chaos from the grave, leaves an unresolved web of interconnected characters in his wake, who are primarily unaware of each other.

Greetings from Asbury Park is Casey Larkin’s story. In his early twenties and on hiatus for one month from his job in New York City to attend Joseph Larkin’s funeral, he spends the hot summer days coming to terms with his identity against a backdrop of disparate characters from varying backgrounds all touched by the long shadow of his deceased, biological father.

Twenty-six-year-old ne’re do well, Davey Larkin, is the pill-popping, heavy-drinking, legitimate son of Joseph Larkin, who “had a personal stool at the bar Pop’s Garage in Asbury Park and bought a drink for anybody who approached him to offer condolences.” Davey is well aware of Casey, his illegitimate half-brother born of his father’s mistress, who’s kept conveniently on the other side of town in an area named Allenhurst. Casey explains their relationship: “Davey’s mother was Joseph’s wife and Allenhurst was as close as she would allow him to keep his mistress . . . I did not even meet Davey until I was eight years old, and did not go to live with them, until three years later, when my mother decided that she’d had enough of being a mistress and headed to New York with the money she’d squeezed out of Joseph in order to try her hand at life as a single woman.”

Casey and Davey have an awkward relationship, and neither have knowledge of their biracial, half-sister, a promising teenage singer in the boardwalk nightclubs named Gabby, whose mother, it is discovered, was Joseph’s maid for 20 years. When Casey and Gabby unexpectedly meet after Joseph Larkin’s funeral through circumstances involving Casey’s inheritance, a complicated relationship ignites, and the moral line between the taboo of shared blood and the unwitting spark of attraction is highlighted.

Meredith Hawthorne is the daughter of an Irish immigrant who works as a landscaper. A year ahead of Casey while they were in middle school, Meredith grew up next door to Casey in Allenhurst and knows of his history with Joseph and Davey Larkin. In reconnecting with Casey, while he’s in town for Joseph’s funeral, Meredith is equally as tentative and inarticulate with her feelings for him as she was when they were younger.

Julie Kowalski owns an upscale boardwalk dress shop named Madame K and employs Gabby part-time. Known regionally as Madame K, Julie is the mother of the free-spirited Lena, with whom Casey has a one-night stand on the night of Joseph’s funeral, after meeting her in a boardwalk bar. Every morning, Julie takes her cup of coffee to her front porch, and watches in fascination as 19-year-old Jacob Besalel runs four laps around Deal lake’s eastern tip.

A serious, disciplined young man from a devout Syrian Jewish background, Jacob is dismayed that his younger sister, Sophia, goes beyond their strict upbringing to test society’s fringes on the boardwalk, where she crosses paths with Madame K, Gabby, and Davey. Because the Besalel family spends summer in the area, all characters in this surprising story are brought into wonderfully crafted, uncanny alignment in ways that add depth, dimension, and clever layers to the tightly entwined story of fate and chance and the inescapable bonds of family connections.

Daniel H. Turtel artfully weaves multiple storylines centered on Asbury Park and stemming from the life of the duplicitous Joseph Larkin. Varying points of view amid clashing cultures are used throughout this modern-day, progressive story that reads like a sign of the times amid a dysfunctional family, whose hidden story is finally brought to light.

Through the use of economic language and the power of a wildly engaging story, Greetings from Asbury Park explores existential questions such as right versus wrong; nature versus nurture; morality versus self-direction, and ultimately, to whom we are accountable. It’s a pithy, enjoyable, modern-day story from start to finish, with a cast of fully realized characters you’ll champion to the end.