Green Wars: Conservation and Decolonization in the Maya Forest 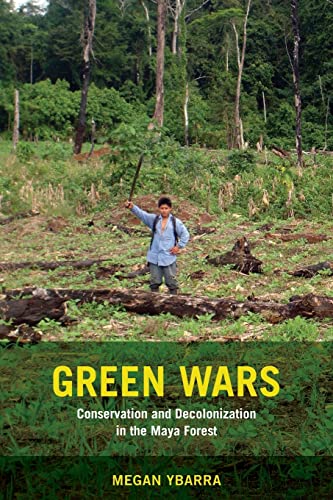 Guatemala, a small post-colonial state that is not so post.

Guatemala, a comparatively weak state (especially looking northward to gingolandia), yet internally it’s the only game in town with an ability to flex its will with impunity.

Guatemala, a country controlled by a Euro-Guatemalan elite known as ladinos contrasted by a majority Maya population who are subject to a racialized system of marginalization, exclusion, and oppression.

Guatemala, land of majestic volcanoes in the Central Highlands and an expansive lowland tropical jungle in its north known at the Maya Forest.

This book focuses on the Q’eqchi’ who dwell in the Maya Forest and are subject to the “green wars,” as Megan Ybarra calls them.

Green Wars explores how the conservation of the Maya Forest, through exclusionary conservation zones, becomes another tool deployed by the government and the military to further marginalize the grindingly poor Maya. By exiling them from their villages and farming livelihood, they become de facto displaced migrants in their own country.

For American readers, national parks and biospheres carry a certain naturalist nostalgia about preserving fragile wilderness landscapes; a value made even more poignant in the face of climate change. Few would argue that fragile landscapes should not be stewarded with caution and care.

However, rather than incorporating the Q’eqchi’ into the process and regarding them as part of the solution, they are simply evicted as a detritus of the human/nature divide that envisions national parks, biosphere, and other ecological reserves as “wilderness” devoid of humans. Of course, people have inhabited the Maya Forest for a very long time indeed, as the ancient Maya and their predecessors would attest.

To fully understand her notion of green wars, it is necessary to more broadly contextualize it within multiple, related forms of oppression operative in Guatemala. It is also important to remember that it is a country characterized by endemic risk, threat, and violence.

Indeed, Ybarra argues provocatively that environmental conservation zones are an extension of racialized exclusion and genocide that has been practiced against the Maya for decades, most notably during scorched-earth campaigns carried out during the country’s bloody Civil War (1960–1996). During that dark period, the military commanders constructed the jungle as a dangerous refuge for communist guerrillas and their sympathizers (basically anyone who lived there).

The post-war second phase frames the Q’eqchi’ Maya as “park invaders,” as they return home to land that is now within park boundaries. Q’eqchi’ land activists would argue that not only is their economic livelihood at risk, but so too their connection to place, which figures deeply in their cultural identity.

Third, a more recent post-war effect of illicit drug trafficking across the northern Guatemala Maya Forest. Here the Guatemalan government is not only weak, thereby creating a highly “permissive zone” for illegal activity, but also complicit with trafficking through corruption.

Ladino settler colonialism can be traced back to the Conquest. It’s impact, among other things, has been to forge and reforge indigenous identity as the antithesis of the loyal citizen subject. Here we have seen three interrelated examples that employ the cultural construct of the jungle as a rationale to justify violent oppression of the Q’eqchi’.

What is to be done? Accountability, Ybarra concludes, starts at home. The U.S. military funds anti-drug trafficking efforts in Guatemala, and U.S. Aid to International Development also has a strong presence. NGOs such as the Nature Conservancy, Conservation International, and World Wide Fund for Nature are financial supporters of Guatemala’s ecological reserves. These groups must pressure the Guatemalan government to create a more equitable, democratic, and transparent conservation-area system.

In summary, this is a book that deftly combines theory and empirical field research that problematizes and complicates our thinking about environmental conservation and its human affects. It does so by also richly contextualizing the “green war” within a much broader history that underscores how Guatemala shifted from violent military junta to a violent democracy.

Future directions might productively explore a comparative perspective linked to the plight of indigenous people elsewhere who suffer from similar trauma. Ybarra, in fact, touches briefly on the formation of U.S. National Parks with specific reference to Yellowstone. From its inception, the park was conceptualized by a rigid nature/human binary, preserved as if humans had never been part of that ecosystem.

Aside from protecting spectacular natural resources, the main goal of creating the parks was the reinvigoration of an enfeebled urban White America through the elixir of pristine wilderness. Environmental historian, Miles Powell, makes a strong argument for White racial superiority as an undergirding rationale that fed into the creation of the parks to the exclusion of other identities who might lay claim (McDonald 2017*).

Toward that end, the U.S. military removed or barred American Indians from the park. Indians on the Shoshone-Bannock Reservation east of the park were starving in the late 1800s. Out of desperation they would head to the southern portion of the park to hunt. In 1895 Bannock Chief Racehorse killed an elk in the park with the intent of being arrested. He then brought a law suite against the U.S. government for breaking the Fort Bridger Treaty (1868) that ceded hunting rights to displaced Shoshone-Bannock. He lost because Wyoming statehood annulled Indian treaties.

The moral here is that indigenous people and their relationship to land and livelihood becomes criminalized in racialized systems that seek to exclude, marginalize, oppress, and eradicate.