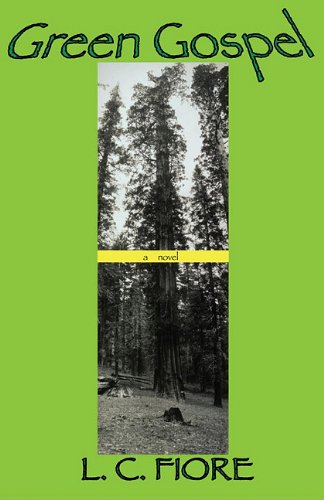 “. . . powerful writing. . . . as skillful as they come at describing a scene and putting the reader in a place in time.”

In L. C. Fiore’s debut novel, Green Gospel, one of his many “shady” characters tells a young woman he suspects of being a runaway, “People only come to Florida for two reasons. They come here to die, if they’re old. Or they come here to hide, to reinvent themselves, usually because they’re running from the law.”

There are only two reasons to read author Fiore’s book: if you enjoy Dumpster diving into the human psyche to see what drives ordinary people to do extraordinary things, or if you love gritty, existential poetry in prose form.

This is not to say that Mr. Fiore’s book does not contain some very powerful writing. He is an award-winning short story writer and as skillful as they come at describing a scene and putting the reader in a place in time. It’s just that the characters he has invented are not people I want to hang out with any longer than it takes to read the book.

Having said this, I found the book engrossing enough to finish, so maybe I’m a dumpster diver at heart. But when I turned the last page, I felt kind of like I do when I’ve driven through a small town in central Florida (where the story is set), relieved to see it through the rearview mirror and glad I don’t have to live there.

The plot is simple. A young woman (Edie) is on the run and gets dumped after a near gang rape on a dark, slimy Florida country road covered with squashed frogs, something the author describes with nauseating detail.

Edie is found by the local sheriff and his deputy and is eventually embraced by a small community that doesn’t ask questions about people’s pasts. About midway through the book, we learn she is an “eco-terrorist,” on the run from the FBI. She may have accidentally killed her lover but we’re not sure until the end.

Edie’s intentions are pure, at least in the beginning. She has that in common with the local charismatic fundamentalist preacher, who in desperation to keep his megachurch afloat, decides to develop a solar energy plant on church land acquired by a marriage that has fallen apart. But the preacher’s wife leaves him and the deal falls through.

The preacher, who secretly keeps drawers full of strands of hair from each person he has ever met (everyone in this book has quirks), finds out about the girl’s past—which involves explosives—and he hatches a plot to save the church and allow Edie to escape the snare of the law closing in on her.

More disconcerting than the omission of quotation marks to distinguish who is speaking, is the sheer number of voices, which tend to interrupt the flow and blend together. Usually a story is told by the voice of one character or an omniscient narrator. Just when you get a sense of the inner voice of one character, another character starts telling his or her story. Maybe this is how it works in real life but between the covers of a book it is a risky conceit.

Certainly Faulkner got away with changing voices but the reader got some prior notice through conventions like chapter headings in the name of the person talking. It seems that everyone in this town, from the sheriff to the chain-smoking nurse’s aide that Edie comes to live with, to the grandiose preacher, engages in long, philosophic inner reveries about the past and the miserable present. Green Gospel feels like a good short story whose characters become overly verbose and get in the way of the telling of the tale.

Of course, breaking convention can be a useful device, freeing the author and the reader from traditional boundaries; and maybe this is Mr. Fiore’s intention. But I lost my way too often, and neither the characters nor the story nor the setting compelled me to suspend my disbelief long enough to find my way back without resenting the detours.