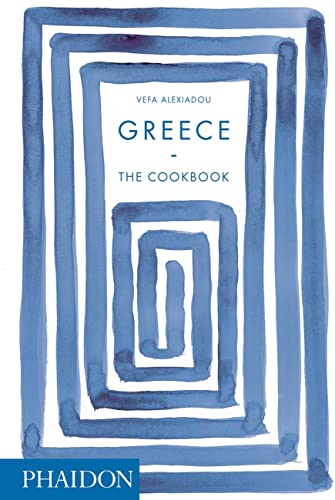 Although this book’s title seems to indicate that this is the end-all, the definitive and comprehensive Greek cookbook still awaits its author/researcher. That fact does not detract at all from this magnificent book which should be in your library whether you’re an aficionado of Greek cuisine or not.

This cookbook is recipe heavy, meaning that the vast bulk of its material is recipes. Recipes without context can often be devoid of soul, but that is not the case here. Cracking this book open without first perusing the Glossary with its recipe notes at the end of the book might seem daunting at first, so start there.

The book opens with a short, and unfortunately, rather standard introduction providing once again the received wisdom concerning the importance of Greek cuisine in the Mediterranean. This has been written a thousand times before and we keep hoping that some new research or thinking can be brought to bear on this topic.

Be that as it may, the reader can jump right into the chapter on Regions which is a fine overview although perfunctory. If one criticism can be made—and it can be made against nearly all Greek food writers except one, and it is understandable—there is a diminution of the important influence of the Ottoman Turks, who occupied Greece for 500 years, on contemporary Greek cooking. Greek food writers will start their histories of Greek food with the ancient Greeks, properly enough, and then gloss over the 800 years of Venetian, Catalan, Arab, and Ottoman Turk influence during the Middle Ages. To her credit Alexiadou is not as guilty of this omission as others have been, and one should remember the book’s subtitle: The Cookbook.

Indeed, this is where the books shines, as a cookbook pure and simple. There are a vast number of traditional recipes covering all regions and all styles. The recipes are given in the Greek, the Greek transliteration, and English. This is useful even if you don’t read Greek.

For example, when traveling in Greece and seeking out restaurants you will notice that nearly every Mediterranean fish you may be unfamiliar with is called “red snapper” a fish that doesn’t exist in the Mediterranean. Even Alexiadou does this, translating both sinagrida and fagri as “red snapper” when in fact these fish are, respectively, dentex and Couch’s sea bream, two fish that are not red snapper and don’t taste like red snapper. This oddity of food naming extends to other foods too, so having the Greek name allows you to order with more authority on your Greek vacation.

The recipes are all inviting even without the delicious looking photographs. The enticing recipe for Mount Pelion Bell Pepper and Onion Pie (piperopita piliou), a phyllo pie stuffed with red, green, and yellow bell peppers, onions, scallions, and eggs, nearly made me leave the keyboard and head for the kitchen.

It’s impossible in a book this size to give anything more than a quick sampling because when one flips through these pages every recipe looks enticing. In fact, you will want to make them all. That’s a good cookbook. Even though one may be very familiar with Greek cuisine, it is rare to see a recipe for tagliatelle with creamed squash, seasoned lightly with nutmeg and pine nuts—how delicious and simple that sounds.

All the classic Greek recipes are here too along with the unfamiliar ones and one could easily cook from Alexiadou’s book every day and never get tired. There is one minor complaint about the recipes: They are not divided into steps and the methods are written as one, generally, long paragraph, which might present a problem to inexperienced cooks who need a bit more hand holding.

If you’re already familiar with Greek cooking this book will prove a treasure trove. If you are new to Greek cooking you will not be disappointed, either, although this book is not written for beginners.