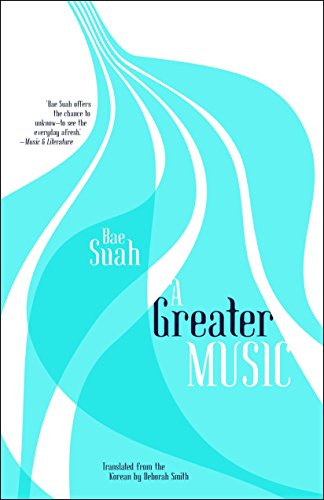 In today’s Internet connected global culture literature is written by authors who do not necessarily reside in the countries of their birth and read by readers worldwide. With its rich cultural life and comparatively low housing costs Berlin, Germany’s metropolitan region has become home to many foreign artists and writers such as American novelist Nell Zink, Israeli poet Admiel Kosman, and South Korean fiction writer Bae Suah.

All but one of the 12 chapters in Bae’s novella A Greater Music are set in Berlin during the unnamed Korean first person female narrator’s two extended stays in the city three years apart. The book’s foreign setting and dense lyrical prose call to mind Ben Lerner’s autobiographical novel Leaving the Atocha Station, though Bae’s multipage paragraphs are longer and her interior monologues even more contemplative than Lerner’s. Her narrator, without Lerner’s Fulbright grant, relies on her own modest means, and lacking the fluency of Lerner’s Spanish and her author’s German (Bae translates German literature into Korean) the narrator struggles with her student level German.

“Besides, if I tried to go into detail then my sentences would end up getting longer and longer, with even the slightest grammatical error opening the door for uncertainty or misunderstanding to creep in, and I’d have to keep qualifying myself, explaining my explanation, the shabby rags of my words piling up in a dizzying accumulation, guilt and shame rising up in me even as I tried to explain this guilt away.”

The first half of the book occurs during the second visit when the narrator has been invited by her friend Joachim to stay with him and either accompany him on his metallurgic apprenticeship in Schleswig-Holstein or stay in his Berlin apartment to house- and dog-sit. She finds she has little in common with the utilitarian Joachim who is preoccupied with money, possessions, popular entertainment, and a circle of superficial friends, and her thoughts turn to M, her former German tutor turned lesbian lover with whom she shared a love of classical music, philosophy, and literature years earlier during her first stay.

The second half of the book is set during that earlier stay and explores those enthusiasms and the narrator’s relationship with M.

“And then there are M’s blue-gray eyes. Those eyes each like a winter lake with an iceberg at its heart, its perfect stillness undisturbed by waterfowl, fish, or even a single wavering blade of grass, eyes that crystallized in a single gaze the most sublime perfection of silence. In an orchestra, M said, I am the piano, and you are the contrabass. I couldn’t not write about M.”

Their relationship ended when our narrator’s visa expired and she had to return to Korea, a technicality M regarded as a pretext while confessing to having cheated on our narrator with a man out of “purely physical curiosity.” Later our narrator realizes how much her departure without a promise to return hurt M, and back in Korea she looks back at her time with M as the happiest time in her life.

Her description of her Korean education whose objective was to instill groupthink concurs with the impression of a conformist society conveyed by other Korean novels such as Han Kang’s The Vegetarian and Korean American author Patricia Park’s Re Jane (also reviewed in NYJB).

“In those days, the authority of school was so absolute that neither I nor even my parents would dare to harbor thoughts that went against the grain.  Such a thing would have been seen as undermining the good of the group, of which we were merely constituent parts.”

The novella does not require but will especially appeal to readers who have knowledge of critical theory. Our narrator is an aesthete for whom serious music represents the pinnacle of the arts, especially compared to visual arts and cinema, though she disagrees with the novella’s title, spoken by a radio announcer, since preference for one musical composition over another is subjective. Her description of the music of raindrops illustrates Oscar Wilde’s reversal of Aristotle in “The Decay of Lying” to the effect that life and nature imitate art rather than the other way around.

“Of all the discrete chords pursuing infinite freedom each on their separate path, each in possession of their own language, a musician singled out one. That chord, which layered raindrop over raindrop, extended the domain of the original droplet throughout the world that lay beneath the massing clouds, beyond the fields and low hills and what had at one time been wilderness.

Bae’s prose alternates between detailed descriptions of everyday life and ruminative passages on music, ideas, and her character’s mental state. The late American poet William Matthews once described his taste in literature as a preference for prosy poetry and poetic prose. A Greater Music exemplifies the latter category; it requires and amply rewards rereading.