The Great Rift: Dick Cheney, Colin Powell, and the Broken Friendship That Defined an Era 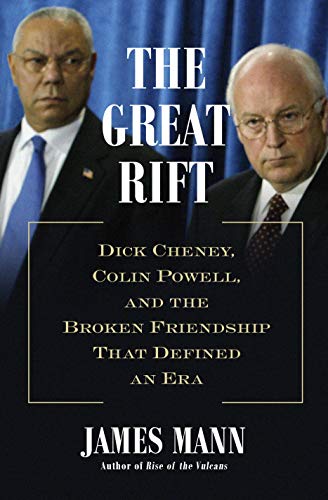 “Mann’s book is about the professional and personal relationship between Cheney and Powell—how it blossomed during the first Gulf War under Bush 41, strained but survived the 9/11 attacks and the early years of the Afghan and Iraqi Wars under Bush 43, and gradually frayed and dissolved as those wars became less popular and seemingly endless. ‘The Great Rift’ between Cheney and Powell was both political and personal.”

When Iraq’s Saddam Hussein invaded Kuwait in the summer of 1990, President George H. W. Bush (Bush 41) successfully used both diplomacy and war to defeat Iraqi forces and liberate Kuwait from Iraqi rule. It was a short and successful war, with few American casualties.

More than a decade later, after the September 11, 2001 attacks, President George W. Bush (Bush 43) used diplomacy and war to defeat the Taliban in Afghanistan, and subsequently to defeat Iraqi forces and topple Hussein’s regime. Both of those wars, however, have proven to be long and messy, involving thousands of American casualties.

Dick Cheney and Colin Powell served as top advisers and policymakers, (Defense Secretary and Chairman of the Joint Chiefs of Staff, respectively) in the first Gulf War under Bush 41 and in the Afghan and Iraqi wars (as Vice President and Secretary of State, respectively) under Bush 43. In his new book, James Mann, currently a fellow at Johns Hopkins University’s School of Advanced International Studies and the author of seven books on U.S. foreign policy, analyzes the roles of Cheney and Powell under both presidents in those military conflicts.

Mann’s book is about the professional and personal relationship between Cheney and Powell—how it blossomed during the first Gulf War under Bush 41, strained but survived the 9/11 attacks and the early years of the Afghan and Iraqi Wars under Bush 43, and gradually frayed and dissolved as those wars became less popular and seemingly endless. “The Great Rift” between Cheney and Powell was both political and personal.

Mann describes how each man climbed the policymaking ladder in Washington. Both worked in the Nixon administration—Cheney as an assistant to Donald Rumsfeld in the Office of Economic Opportunity (Rumsfeld was also a special assistant to the President) and Powell (who had returned from combat tours in Vietnam) as a White House Fellow.

In the aftermath of Watergate, Cheney at the young age of 35 served as President Gerald Ford’s chief of staff, while Powell continued to climb the ladder in the U.S. Army. Mann credits young leaders in Washington in the wake of Vietnam and Watergate, like Cheney and Powell, for “restoring a sense that the country still had a bright future and could deal with its problems.”

Both men climbed the ladder of power because of their skills and talent, but they also benefitted from the help of Washington mentors—for Cheney it was Rumsfeld; for Powell it was Frank Carlucci.

Cheney was clearly more politically and philosophically conservative than Powell, and that political and philosophical difference plus Powell’s experience in Vietnam, Mann believes, shaped their future worldviews and foreshadowed the “great rift” that grew between them during the Afghan and Iraqi Wars.

During the Reagan administration, Cheney served as a Republican leader in the House of Representatives, while Powell served as the principal military assistant to Defense Secretary Caspar Weinberger, whose top civilian assistant was Frank Carlucci. It was here, Mann writes, that Powell “learned how the game was played in Washington, how things got done and why they didn’t.”

While Powell worked in the Pentagon, Defense Secretary Weinberger drafted guidelines for the use of American military force that emphasized, in Mann’s words, “the importance of clear objectives, public support, and the use of ‘decisive force.’” These guidelines mirrored the lessons Powell learned from Vietnam. “Over the following decades, as Powell rose to one top-level job after another,” Mann explains, “the ideas set forth by Weinberger would more commonly be known, in modified form, as the Powell doctrine.”

Mann briefly describes the first meeting between Cheney and Powell in Frankfurt, Germany, where the Wyoming congressman was introduced to the commander of U.S. Army’s V Corps, Lt. Gen. Powell. “Powell later said,” Mann writes, “that he had been struck by the incisive nature of Cheney’s questions” about plans to defend Western Europe in the event of a Soviet invasion. Mann quotes Powell about Cheney: “I recognized that I was in the presence of an exceptional mind.” The feeling was mutual.

As the Cold War wound down, Powell served as deputy to National Security Adviser Frank Carlucci, and when Carlucci departed, Powell became the National Security Adviser. This was in the midst of the Iran-Contra affair, a Washington “scandal” that pitted a Democratic congress against a Republican president and revealed Dick Cheney’s expansive view of the president’s foreign policy powers.

Cheney, Mann writes, viewed Iran-Contra as a misguided attempt by Congress to limit the president’s foreign policy power. Mann clearly disagrees with Cheney’s view. But Cheney lived through the post-Vietnam period where a Democratic congress passed laws, such as the War Powers Act, that sought to restrain presidential power, and imposed congressional oversight of U.S. intelligence agencies that hampered the effectiveness of those agencies.

Cheney saw Iran-Contra as another effort by Democrats in Congress to limit the powers of a Republican president whose policies they opposed. Worse, the appointment of a special prosecutor in the Iran-Contra affair, Cheney believed, criminalized policy differences. When during the Bush 43 presidency, the leak of a CIA employee’s identity triggered another special prosecutor appointment that resulted in the prosecution of Cheney’s top aide (who had nothing to do with the leak), it further reinforced Cheney’s view that Democrats were misusing legislative powers to limit executive power and again criminalizing differences over foreign policy.

Mann criticizes Powell for being aware of the secret arms sales to Iran and for helping to execute the arms transfers. He notes that special prosecutor Lawrence Walsh informed congress that Powell had provided “misleading testimony” and did not fully disclose what he knew about the affair. But Walsh had bigger targets in mind, including Defense Secretary Weinberger who, ironically, strongly opposed the sale of arms to Iran.

Powell meanwhile helped guide the Reagan administration’s efforts to successfully end the Cold War. Mann accepts what he calls the “many accounts” (including from Powell) that Reagan “had started to slip mentally from time to time during his final two years in office.” There are “many accounts” to the contrary, as well. Reagan’s successor, George H.W. Bush, skillfully managed the end of the Cold War with help from his Secretary of Defense Dick Cheney and his Chairman of the Joint Chiefs of Staff Colin Powell.

The bulk of Mann’s book focuses on the interaction of Cheney and Powell during the first Gulf War in 1990-91 and the Afghan and Iraqi Wars in the early 2000s. During the first Gulf War, Cheney and Powell operated as a team—the civilian and military leaders of the Pentagon. Their friendship grew. They worked well together. The war was short and successful.

During the Afghan and Iraqi Wars under Bush 43, however, Vice President Cheney (and his staff) and Secretary of State Powell (and his staff) repeatedly clashed over policy and bureaucratic turf. Mann attributes this to a conflict of visions—Cheney’s preferences for unilateralism, the broader use of military power, and unrestricted presidential power in foreign policy versus Powell’s preferences for multilateralism, using military force as a last resort, and consulting with Congress and garnering public support for foreign policy and wars—and the seemingly inevitable struggles for influence between the White House (in this case the Vice President’s office) and State Department. Mann calls it a clash between the “Cheney tribe” and “Powell tribe.”

There is much truth in this analysis, but Mann goes beyond policy and philosophical differences to portray Cheney as a dark (i.e, “conservative,”  “right-wing”) and sinister (“neoconservative,” “hawk”) force who exercised too much influence over the inexperienced Bush 43.  Powell, on the other hand, is portrayed as prudent, moderate, measured, diplomatic, George Marshall-like.

But what was really behind the “great rift” is how Cheney and Powell (and their staffs) reacted to the 9/11 attacks. Cheney (and Bush 43) saw this as World War IV—to use Norman Podhoretz’s description of the struggle against fundamentalist Islam. Cheney was determined to prevent another such attack from occurring on American soil and believed that the U.S. had to act preemptively to forestall such an attack. That is what drove the policy towards Iraq.

Powell saw it differently. His experience in Vietnam taught him to avoid endless wars and nation-building. He correctly foresaw the futility of trying to democratize the Middle East. In the end, Powell was right.

But, though Mann will not acknowledge it, Cheney and Bush 43 were right, too. They waged war abroad and implemented policies at home to prevent another 9/11-like attack—and they were successful. All presidents in wartime have done things to protect the country that in hindsight look questionable, wrong, and even unlawful.

Those like Mann who are critical of Cheney and Bush 43, should remember what Thomas Jefferson wrote in 1810: “A strict observance of the written laws is doubtless one of the highest virtues of a good citizen, but it is not the highest. The laws of necessity, of self-preservation, of saving our country when in danger, are of higher obligation. To lose our country by a scrupulous adherence to written law would be to lose the law itself, with life, liberty, property and all those who are enjoying them with us; thus absurdly sacrificing the ends to the means.”

Dick Cheney and Colin Powell both served their country faithfully, even when they clashed over policy during wartime. It is a tragedy that their policy differences and bureaucratic turf wars ended their cordiality and friendship.