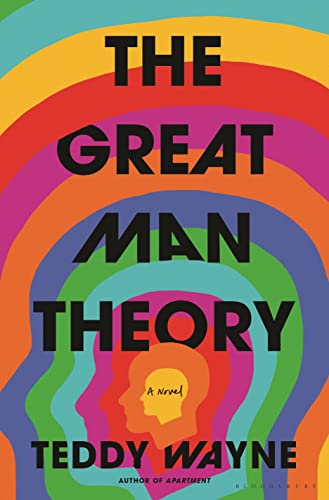 The Great Man Theory is an engrossing political novel but not in the usual sense. It doesn’t peek behind the curtain of government infighting or plant the nuclear football atop the Resolute Desk in the Oval Office. Instead, it asks a crucial question: What is an individual’s responsibility to make the world better?

The vehicle for probing this question is a fairly unlikable 46-year-old, divorced, recently demoted college writing instructor and technophobe named Paul, whose financial situation becomes so dire that he moves in with his widowed mother in the Bronx and begins driving for a ride-sharing service to earn a few more dollars (using his mother’s car).

Paul has pinned most of his dreams on the book he’s writing for a small university press, entitled The Luddite Manifesto. Once it’s published, he tells himself, it will earn him tenure and maybe a job at a better college, bring offers to write for prestigious journals, and open millions of eyes to the evils of smartphones, the internet, social media, and other modern technology.

Meanwhile, he lectures constantly on these themes—to his few remaining friends, his students, his department chair, his (rare) dates, his 11-year-old daughter Mabel, and his mother.

In a typical rant, while driving Mabel to her mother and stepfather’s expensive townhouse in a liberal-fashionable part of Brooklyn, he inveighs against social media sites that “convince their users to upload content for free so they can get your personal information to target you for companies that advertise. And they’re not really free, even if there’s no financial cost to use them. They take over your time . . .” and on and on for some two dozen lines, occasionally pausing so that Mabel can mumble, “Yup.”

“What matters to me,” he ends that particular harangue, “is being a good person and trying to make life better for others.”

Paul is uncomfortably aware that he isn’t actually doing anything to improve anyone’s life. Instead, violating his proclaimed Luddite beliefs, he has started posting snarky political comments on a Twitter-style site—an outpouring that has become wildly popular.

“He’d been sheltering behind a screen, convincing himself that what he wrote wasn’t simply bouncing around an echo chamber,” he thinks. “He hadn’t given succor to an abject person, nor, in a meaningful battle in a physical space, opposed anyone malevolent.”

As every underpinning of his life crumbles, Paul decides to take a risk that is totally out of character. He concocts a wild plot to date a senior producer for a Tucker Carlson-type TV commentator in order to get invited onto the show as an expert on the gig economy. Then, with the cameras whirring, according to his plan, he will stun the audience with a brilliant monologue that will demolish the commentator’s lies.

“It’s the great man theory of one person shaping history,” he argues to a couple of colleagues, as he offers the hypothetical possibility of assassinating the Trumpesque U.S. president if that would “save the country.” He backs down from his theoretical argument, worried about antagonizing the colleagues. Yet, he thinks, “it was a form of complicity not to speak up at these moments, even among so-called allies. If I don’t fix it, who will?”

Bravely, author Teddy Wayne—an award-winning novelist and former New York Times columnist–-has made Paul annoying, self-righteous, and whiny. Those qualities are perfectly tuned to build the compelling plot and also make Paul a fully realized character, whether or not they alienate readers.

However, Paul’s periodic cluelessness isn’t believable. To give one example: Since he’s neither stupid nor politically unaware, surely he would realize that his invitation to a young female student to work on her essay in his car with him, alone in a dark parking garage, might be considered sexual harassment.

The plot really takes off in the final 40 pages, like the kind of thriller Paul would never read or write.