The Great Battles of All Time 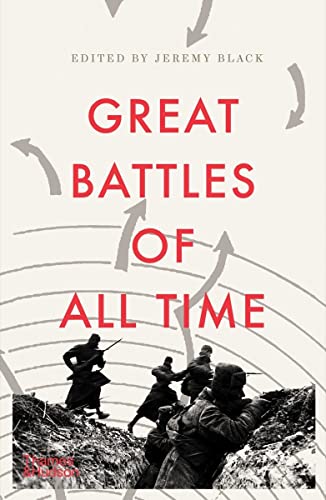 “An excellent introductory or reference volume for the novice history student beginning the study of military history . . .”

Writing a book discussing a list of great battles in history is always fraught with peril. Some readers will always disagree with an author’s choices and debate endlessly which battles should or should not be included. Historian Jeremy Black has attempted to avoid this challenge by including nearly every historically significant battle from antiquity through the 20th century. Land, sea, or air, Mr. Black covers them all, each with a color map plate and a very concise four- or five-page description.

The usual battles you would expect are here—Cannae, Lepanto, Trafalgar, Waterloo, and Gettysburg. But there are also some lesser-known battles such as Sekigahra, Sadowa, and Huai-Hai, that will probably not be as familiar with many Western readers. Although each of the descriptions is very brief, taken with the accompanying map plate, they provide a good overview of the events, commanders, and outcome, including a short paragraph that places the battle in its historical context and importance.

Two factors make this volume stand out. First, Black does cast his net wider than other similar volumes by examining these battles in Japan and China. Second, even though each battle description is fairly short, an extensive bibliography is provided for the reader who wants to further research a particular battle. The two features make this an excellent introductory or reference volume for the novice history student beginning the study of military history.