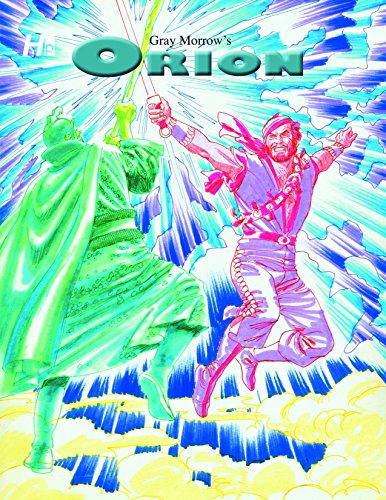 “Orion is Pirates of the Caribbean for the adult fantasy world.”

In the late seventies Gray Morrow’s series Orion, a combination of Errol Flynn’s swashbuckling charm and Flash Gordon’s endless space adventures, proved a winner in the pages of Heavy Metal magazine. It was an adult take on both concepts that combined the two ideas effortlessly.

Orion walked with swagger and style, but he was closer to a normal man than someone of Conan’s highly stylized nature. Mr. Morrow’s skill gave Orion a highly individualized sense of style. Yes, heads did roll violently from shoulders they had previously been attached to. And yes, the women were often barely clothed, but Orion wasn’t meant for a twelve year old reading Flash Gordon. It was meant for the twenty-five year old who had already outgrown Flash Gordon.

More like Errol Flynn swinging from a rope on the side of a ship with a sword raised over his head while chased by insanity.

For decades, fans of the Mr. Morrow’s Orion series have long hoped for a decent compilation of the artist’s imaginative work. Hermes Press has just gathered the entire storyline of Orion into a single, full-sized volume. The results are impressive. It’s not just that the entire storyline is now in one place for fans everywhere to discover, it’s that Mr. Morrow’s artwork and imagination finally receives the recognition it deserves.

Prior to Orion, his art had been published in series such as Classics Illustrated, Creepy, Eerie, Combat, and magazines such as Fantasy and Galaxy. For a while he even worked on the Spider-Man TV series during the late sixties and early seventies in layout and as a director.

Essentially a self-taught artist, Mr. Morrow was very open about his influences. Primarily among them was Flash Gordon as drawn by Alex Raymond. When it had first appeared in 1934 the Sunday pages revolutionized comic art.

They were full-color and cinematic yet at the same time, very personal. Raymond’s work was sensual and it was heroic. The strip went onto to inspire generations of artists and storytellers, Mr. Morrow among them. It is the touch of Raymond that hangs over Morrow’s pencils inside the world of Orion.

It is a world filled with four-armed aliens, half naked princesses, crazed sorcerers who ride winged bat-like creatures, yellow creatures twice as alluring as any earth-woman, bands of nomadic barbarians, and ostrich-like steeds that form a bond with their riders. Orion himself carries a mystical sword filled with energy that is the envy of every brigand and wizard who crosses his path.

It is as wild a world as could be imagined.

That world may not be as crazy and violent as what is taken for granted today, but for the time it was near visionary. In an odd way the succinct and direct manner in which Mr. Morrow tells Orion’s story also reflects his time working in TV. The stories have a compactness and urgency to them that pulls the reader along at breakneck speed.

It is a world that Mr. Morrow spent years trying to bring to the printed page. He had been working at it since the sixties. The seeds of Orion can be found in a six-page story he did in 1967 for the little known magazine Witzend. But it would be another decade before he could realize his ambitions as a storyteller and illustrator.

The seventies were a transitory period for skilled comic artists—especially for those who loved the action and adventure genres. The traditional route of creating a newspaper strip and selling it to a syndicate was closing off. Newspapers were distancing themselves from large action adventure and moving into humor and funny animal strips. This had to do with the changing habits of readers as well as a marketplace that was shrinking in the face of TV and other encroaching mediums.

While the major comic book publishers were able to provide work for good artists, they could be insular and still very hard to break into. In the early seventies Mr. Morrow had managed to get into DC and create the western hero El Diablo and for Marvel he co-created Man-Thing with Roy Thomas and Gerry Conway. He had drawn Captain America and a few others at Marvel, but he wasn’t moving forward.

Eventually Mr. Morrow ended up doing a stint at Archie drawing their Red Circle line of hero books. In addition to this he worked at Charlton and did features for National Lampoon. Finally Heavy Metal published the first full-color installment of Orion in their March 1978 issue (V1, #12). The second installment appeared in V2 36 with a cover date of October 1978.

It was right at this time that Mr. Morrow’s lifelong work began to pay off in unexpected ways. To support himself over the years he had taken ghost work on strips such as Secret Agent X-9 or Rip Kirby. Just as Orion finally saw international success in Heavy Metal, the New York Times resurrected Buck Rogers and offered Mr. Morrow the chance to helm the new strip.

His run lasted until 1982. In 1983 he was offered the job of drawing the Sunday pages for Tarzan. Given the chance to follow in the steps of such widely respected artists as Hal Foster, Burne Hogarth and others, Mr. Morrow took the job and remained the primary artist until 2001.

Orion, which had undoubtedly been seen by other artists as well as those who hired him to work on Buck Rogers and then Tarzan, fell by the wayside. Today Orion is the classic “cult” strip finally seeing daylight once again.

In addition to the complete Orion storyline, Hermes Press has included Mr. Morrow’s later work for Pacific Comics in the early eighties. The Edge of Chaos series worked along the more traditional storytelling lines of ancient mythology. While it may not reach the levels Orion does, its presence is welcome as you can see the growth of Mr. Morrow’s style inside these pages.

When it comes to swashbuckling adventure, Gray Morrow’s Orion is related to Pirates of the Caribbean the way Heavy Metal magazine is related to the classic newspaper strip Peanuts. They all share genres and storytelling brilliance, but most of the similarities end there.

Orion is Pirates of the Caribbean for the adult fantasy world.