The Graveyard Apartment: A Novel 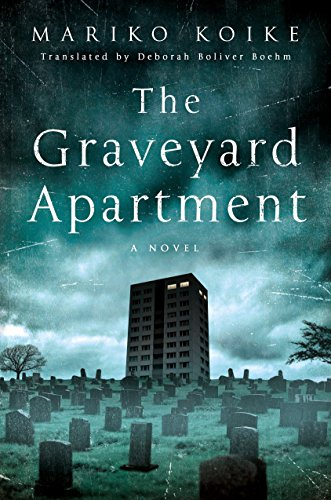 Moving is not fun. One could even say that moving is hell. But when such words are uttered, they are rarely said with any sense of literalness. Stuffing books into moldy cardboard boxes or rummaging through all of the detritus that has been accumulated through the years is not really akin to eternal suffering. For the Kano family, moving is unfortunately a very real type of hell.

Looking from the outside, Teppei Kano, his wife Misao, their daughter Tamao, and their dog Cookie seem to have it all together. While he’s a salaried, white-collar worker in the advertising industry, Misao is a freelance illustrator. They don’t make a lot of money, but they are comfortable enough. Their only problem is their cramped apartment. So when a luxury apartment opens up that promises balcony space and eight floors of clean, modern accommodations, the Kanos pounce. Even better, all of this good living only costs 18,200 yen a month.

There’s one catch. The Central Plaza Mansion is located right next to a sprawling and ancient graveyard. Even worse, the apartment complex was supposed to be near a relatively new shopping plaza, but plans for that were abandoned in the 1990s. The only reminder of that aborted construction project is a road that runs parallel to the complex’s basement.

It doesn’t take long for things to go south really quickly. First, the family’s pet bird mysteriously dies. Weirder still, as a ghost, the bird makes a habit of visiting Tamao and warning her about the building. According to the avian apparition, a coterie of angry spirits, who are somewhere between human and demon, have surrounded the building. They want all the living out.

Soon enough, a strange shadow appears on a single television station that won’t go away. Then, during some routine horseplay, Tamao suffers a nasty cut on her leg down in the basement. The doctor’s “weasel wind” explanation is not only ridiculous (the basement does not contain a single window), but it fails to explain why the building’s elevator repeatedly breaks down, especially when people are trying to leave the basement. Before long, the other residents in the building begin to flee in droves. Eventually, the only people left in the eight-story building are the Kanos.

As the terror unfolds, the awful truth about Teppei and Misao leaks out. Prior to marrying Misao, Teppei was married to a woman named Reiko. Reiko was a cold, distant sort of person. Her frigidness was made worse by the fact that Teppei cheated on her with Misao, a co-worker at the time. No longer able to reconcile herself with her husband’s infidelity, Reiko committed suicide. Tatsuji, Teppei’s brother, is unable to forgive or forget this shameful occurrence, while Teppei himself has struggled for years to feel even remorseful at all. Maybe the family’s new home is a beacon for Reiko’s angry spirit. Maybe not. Whatever the case, the apartment by the graveyard is nothing but bad mojo.

Originally published in Japan in 1993, The Graveyard Apartment creeps and crawls its way to a thoroughly unsettling climax. More chilling than outright terrifying, The Graveyard Apartment is a traditional ghost story gone cinematic. Certain moments, like the discovery of the buried road and Tamao’s freakish “accident,” seem like perfect fits for silver screen adaptation.

Even without such an adaptation, Koike’s novel is a brilliantly told story of high anxiety and dread that also suggests a lot more. Furthermore, Koike’s decision to leave the supernatural events mostly unexplained is the right one. By the end of the novel, closure is remote and most readers will find it hard to sleep for a few nights. That is the mark of a good horror novel. The Graveyard Apartment is a very, very good horror novel.