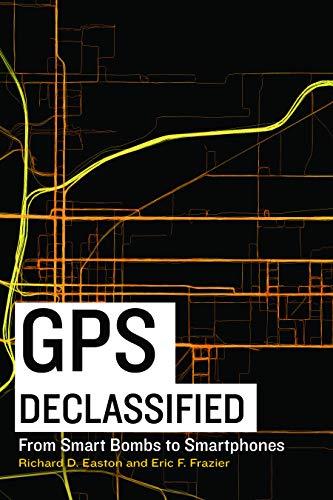 “As an introduction to GPS, its history, uses, issues and concerns GPS Declassified can’t be beat.”

Those that have imagined a Global Positioning System (GPS) predate the dawn of the space age. Though science fiction author Arthur C. Clark predicted communications satellites in 1945 and GPS in 1956, the idea goes even further back—to the 19th century. Edward Everett Hale, the author of The Man Without a Country, in his short story “The Brick Moon” proposed using satellites to measure longitude in 1870!

Consider this. The first proposals for GPS-like satellites were funded in the 1960s during the Cold War and implemented as secret military projects. The first GPS satellite was launched in 1978. And while GPS itself became operational in 1982, it was limited and had only a few commercial applications.

The 24th GPS satellite needed for round the clock coverage was launched in 1994 and today not quite 20 years later, the GPS commercial market is valued at tens of billions of dollars.

Written in a clear and lively style GPS Declassified provides readers with GPS development history including personal recollections from leading developers. Debate persists over credit due, allowing the authors a quote by Alexander von Humboldt, a 19th century geographer and naturalist: “There are three stages of scientific discovery: first people deny it’s true; then they deny it’s important; finally they credit the wrong person.” Readers will also find the science and technical details behind GPS to be a little thin. Although the title contains the word Declassified, GPS’ internal workings still remain secret.

Vanguard’s purported purpose was geodesy, using a satellite to make accurate measurements of the Earth. Vanguard was touted as a civilian program, its civilian sponsor the National Science Foundation (NSF), part of a science initiative, the 1957–1958 International Geophysical Year (IGY); however, the Vanguard project was actually run by the Department of Defense (DOD) through secret directive 5520 of the National Security Council (NSC) signed by President Eisenhower. Geodesy also has military value by improving weapons targeting.

The Vanguard project had a spectacular failure on its first attempted rocket launch (covered by early TV) but later went on to successfully place three satellites into orbit. Vanguard’s first successful launch was in 1958.

The satellite emitted a monitored radio signal for tracking because of the difficulty in detecting small objects (only six inches in diameter) in space by sight, even with powerful optical telescopes.

The scientific concept of GPS comes from the relationship that if you can pinpoint a single radio-emitter in orbit using multiple receivers on the Earth, you can invert the mathematics and pinpoint a single receiver’s location on the Earth with multiple orbiting satellites. A reference clock’s precision is of utmost importance—an error of even one-millionth of a second of a radio signal traveling at the speed of light translates to a distance of almost 300 meters.

In 1964 Anderson made another proposal, a constellation of 24 satellites orbiting in four planes with six-hour orbits using precision atomic clocks with time keeping on the ground. This proposal was fairly close to the configuration and orbits that has GPS today though time keeping remained on the ground because it was not yet feasible to put atomic clocks into satellites.

Around the same time as Roy Anderson’s proposals, Roger Easton of NRL invented the “timation'” technique that measured the time it took for a signal to travel from satellite to receiver, used for determining position. This technique was successfully tested by Timation satellite M-I, launched in 1967.

The next advance came from comparing satellite signals using two different frequencies to correct for ionospheric distortion, which was tested by the Timation II satellite launched in 1969. (Today MIT Haystack Observatory studies ionospheric distortion data collected from GPS receivers, something that just goes to show that one person’s noise is another’s data.)

The timation technique led to the concept of always using two frequencies and a satellite constellation in three orbital planes with 8-hour orbit that was later changed to 12-hour orbits when atomic clocks became economically feasible (at this point still limited to ground stations).

As the Army, Navy and Air Force had costly and competing navigation efforts, budgetary pressure came from the White House for consolidation. President Nixon’s Science Advisor Lee Dubridge said there were “too many people, too many bureaucracies, too much politics, and to many agencies involved.” As part of consolidation, the Army’s SECOR and the Air Force 621B project were cancelled while the Navy’s Timation series of satellites became the first GPS satellites, though launched under Air Force administration under a different name. Renamed “NTS,” the Navy Timation satellites were the first GPS satellites, and the NTS-2 satellite was the first to carry a cesium atomic clock, accurate to one second per 100 years.

Between 1974 and 1988, as GPS development costs climbed, the number of military users decreased, as a consequence the project lost support. After the Government Accounting Office (GAO) issued a critical report, and in 1982 the House Armed Services Committee recommended termination, funding for GPS came close to being zeroed out.

GPS did survive and In 1982 even before a full constellation was flying, the first commercial receivers and applications became available. Although a classified military project, civilian use was considered from the start—open codes for civilians and pseudorandom codes for the military, though the accuracy of civilian position was intentionally crippled over concerns that GPS might be used by the bad guys.

The first commercial applications for GPS was land surveying, which needing only one satellite to be visible; the collected data was to be processed later. The early receivers cost $250,000 in 1982 dollars, and the antennas weighed more than 100 lbs apiece. A surveyor would have to purchase (or rent) two units that needed to be synchronized to each other.

As expensive and unwieldy as this seemed, its costs were only 10% to 20% of conventional mapping while providing three times the accuracy. (The authors are unclear in explaining as to whether the two-receiver, two-antenna configuration was differential GPS, a technique for achieving higher accuracy from civilian GPS codes, and something necessary for surveying.)

Through the mid-80s, size, weight, cost of GPS systems decreased. 1988 saw handheld units being introduced into the commercial market. Though GPS was fully operational in 1988 the constellation was still incomplete, which meant that there would be periods during the day when there was incomplete or no coverage.

GPS’ first military use was during the 1991 Persian Gulf War and was considered extremely secret because launch times were limited by the coverage of the incomplete constellation. Public knowledge that GPS was being used for targeting could also have complicated negotiations over the Strategic Arms Reduction Treaty (START I) that going on at the same time.

Between 1993 and 1994 GPS was phased into civilian aviation, part of the FAA’s Wide Area Augmentation System (WAAS). Note the military’s ability to arbitrarily disrupt or turn off the civilian GPS signal caused serious concerns over civilian GPS use where safety was important. To calm those concerns in 1996 President Clinton in 1996 issued a Presidential Decision Directive (PDD NTSC-6) to discontinue use of the crippled Selective Availability (SA) mode.

In the mid-1990s dialing 911 for an emergency had to change because of increasing dependence on and popularity of mobile phones. As a consequence enhanced or e-911, was proposed but not implemented until the 2000s. A moving deadline followed the expectation that GPS would be placed into cell phones, with the consequence of (with not well-thought-out implications of) your cell phone knowing where you are even if you don’t.

A significant portion of GPS Declassified covers the vast and still growing GPS consumer industry. From GPS embedded in golf balls, sneakers, shopping carts, and even pets, the Location Based Services (LBS) market is worth tens of billions of dollars and is still growing. It would be difficult to list all possible applications as uses are still being invented. Consider that even as GM faced bankruptcy in 2009, their GPS-based product OnStar went from 2 million subscribers (and 9 billion dollars) to 6.4 million subscribers in 2013.

Applications for tracking objects that can be assisted by GPS include inventory control, shipping, traffic route optimization, and recovering lost or stolen items. Applications for finding or tracking people include emergency services and surveillance, including tracking parolees by ankle bracelet.

Farmers can use GPS to increase farm efficiency with precision guided tractors to place just the right amount of seed and fertilizer in the just the right place. GPS allows bulldozers to excavate without surveying and can produce 3D views where visibility is limited, such as clearing river bottoms. There are proposals for road taxes based on GPS monitoring of trucks and cars (to replace oil-based taxes that can only decrease with increasing numbers of electric vehicles). GPS-guided driverless cars have been granted licenses in some states, and it’s only a matter of time for GPS-guided drone aircraft.

GPS does have drawbacks. Problems have occurred with faulty applications such as inaccurate maps and poor route calculations. Privacy and legal issues have arisen from the auto-storage of position in cell phones, as the police do not need a warrant to access location information held in smart phones.

Given our dependence on GPS consider the consequences of signal disruption that can occur from a variety of sources: failures from aging satellites, ground station failures, software failures, solar flares, signal spoofing and jamming. When this reviewer searched for GPS jammers, he found them for sale online and for as low as $40. And even though the use of GPS jammers is illegal in the U.S., the website selling them was found to be both offshore and a Google sponsored link.

As an introduction to GPS, its history, uses, issues and concerns GPS Declassified can’t be beat.