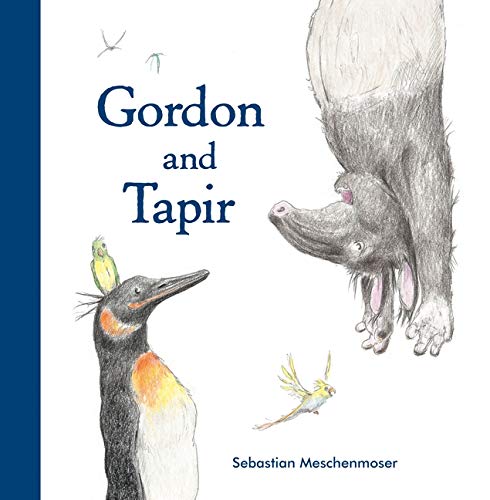 The best picture books are, of course, highly entertaining. It might be argued that when they are also edifying, they become even more memorable. Add in gorgeous art and you have a classic.

Highly regarded German author/illustrator Sebastian Meschenmosher aims for this lofty trifecta with his latest offering, Gordon and Tapir, but despite its charm (and its nomination for a German children’s book award), it doesn’t quite manage to pull it off.

Nevertheless, the odd couple story has undeniable appeal, and it begins rather hilariously when a fastidious penguin, Gordon, relaxing on the potty with the news, discovers that the toilet paper is kaput. Unspooled paper in the hall leads him to discover that the culprit, his decidedly unfastidious and free-spirited friend and roommate, Tapir, took it to make a hammock and a turban.

This is evidently the last straw because Gordon decides that “things could not go on like this.” He shows Tapir that the floors in their home are sticky, that his birds are too noisy, that their living room and kitchen are disaster areas—and there is a stranger in the bathtub. Tapir responds by showing Gordon that he is a complainer, a neat freak, and a snob.

Gloominess descends when the spat ends unresolved. The buddies mope about until Tapir returns from work to find a note from Gordon informing him that he has moved out so they can live the way they wish.

Subsequently, the pair sees and speaks to each other often, and the book ends when Gordon comes to a party at Tapir’s—a rowdy one that ends with a lot of unspooled toilet paper that one presumes Gordon will not have to clean up.

The book’s charm comes across in a number of ways. Meschenmosher’s color pencil illustrations are expressive and full of humorous details, the situations are amusing (though nothing that follows lives up to the opening), and the solution is highly refreshing—that differences need not always be resolved with compromises and that sometimes friends are better off giving each other some space.

But this solution comes not much beyond halfway through the book, draining the rest of dramatic tension. And more importantly, while the story of Gordon and Tapir turns out to be an engaging and original way to teach about conflict resolution among friends, ultimately, it is much more edifying than entertaining.