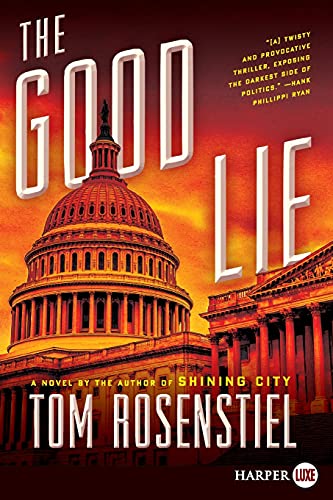 “a riveting description of what really happens behind those closed doors of Washington’s flawed and dysfunctional traditions.”

When a covert American diplomatic compound is attacked in North Africa, the White House is overwhelmed with allegations of incompetence. Numerous conspiracy theories begin to circulate and eager to learn the truth, the president and his staff turn to political fixers Peter Rena and his partner, Randi Brooks for answers. As they delve deep into the secretive world of espionage and national security, hoping to do their work surreptitiously, they quickly discover that will be impossible, when everything is leaked to a reporter and a bombshell exposé is published. Caught in the middle of the scandal, they hope to deflect some of the harmful fallout from the president.

“Twenty-five months earlier James Barlow Nash defied nearly all prognosticators and won a second term to his enigmatic presidency . . . As he moved to national prominence in an ear of political alienation, the condescending distrust of both party establishments turned to be one of Nash’s strongest political virtues.”

Congressional hearings are opened, the military appears to be in shutdown mode, the press is eager for another big story, and political enemies are plotting their next move. Rena and Brooks learn the hard way that secrets in Washington are hard to keep and often come with a very high price.

The second installment in the Peter Rena series, The Good Lie by Tom Rosenstiel provides plenty of intrigue in this electrifying political page-turner. Rosenstiel is the author of numerous books that includes the critically acclaimed series debut, Shining City (2017, Ecco). He is also the executive director of the American Press Institute and a senior fellow at the Brookings Institution.

Set in the cut throat, eat or be eaten world of Washington politics, in The Good Lie, Rosenstiel does an excellent job of balancing political intrigue and mystery, while providing poignant observations of the complexities that engulf and often incapacitate its inner circles of power.

Our protagonists, Rena and Brooks, bob and weave their way through sticky entanglements and are blocked at every turn. Faced with lies and coverups, they cleverly maneuver through these obstacles, which gives them even more motivation to uncover the truth.

In The Good Lie, Rosenstiel provides an accurate and enlightening portrayal of the delicate interplay that exists between the various departments within Washington politics. As a seasoned journalist, Rosenstiel knows what truly motivates politicians and because of this inside information, he is able to expertly convey these tendencies to the reader.

For those who pay attention to real-life political scandals, this novel offers a riveting description of what really happens behind those closed doors of Washington’s flawed and dysfunctional traditions. The Good Lie, much like its predecessor, Shining City, is an entertaining and suspenseful read that skillfully reconnoiters the world of power and corruption, secrets and ambition.