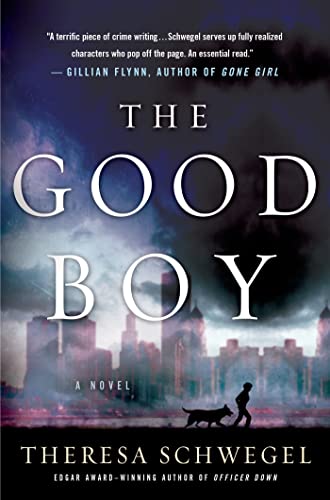 Theresa Schwegel was born and raised in Chicago. She is an Edgar Award Winner for Best First Novel. Her latest novel, The Good Boy, takes place in Chicago, a town she knows well. Her descriptions of certain neighborhoods rings true as her characters move throughout the rough and tumble city that can be as ugly as it is beautiful.

The story begins with Chicago police K-9 officer Pete Murphy ruminating about his job. His position in the K-9 Division does not seem satisfying, particularly since it came as a result of an altercation on the street. Murphy’s superiors assigned him there to keep him out of the limelight as they fight a lawsuit spawned by Murphy’s questionable arrest of gang members.

Early in the first chapter, Murphy is driving home in his squad car accompanied by his canine partner Butchie when he decides to make a traffic stop. That’s realistic—K-9 cops take both their car and dog home. But the author describes the cop making the stop and then going to his trunk to put on his gun, gun belt, and vest. This wouldn’t happen in the real world. A cop is always armed in his squad car.

Nevertheless, Murphy makes the stop and discovers gang members inside the vehicle. No real violation has occurred, which only adds to Murphy’s problems, since Butchie ends up biting one of the passengers. The incident brings more unwanted attention upon Murphy, something his superiors told him to avoid.

The story moves forward—although it does bog down in spots—soon introducing us to Murphy’s family. His wife seems to be constantly stressed out, although it’s not exactly clear why. Daughter McKenna suffers from typical teenager problems, shutting her parents out of her life and sneaking around with kids she shouldn’t.

The real protagonist who brings the story to life and generates the most interest is Murphy’s little son, Joel. He and Murphy’s canine sneak out of the house one night and find themselves in a terrible mess. The boy and dog become partners as they travel surreptitiously through the city on a mission to help Murphy clear his name.

Joel’s parents discover their son is missing and begin a search that leads to some surprising discoveries. Yet notably absent are any emotions, particularly in Murphy, that are normally associated with a parent whose child is missing.

As the pair journeys through different parts of the city, they do their best to stay one step ahead of trouble, and The Good Boy’s best moments occur when we follow Joel and Butchie on their perilous adventure.

A mixed bag of plausibility and absence, this book was a pleasant read.