A Good American Family: The Red Scare and My Father 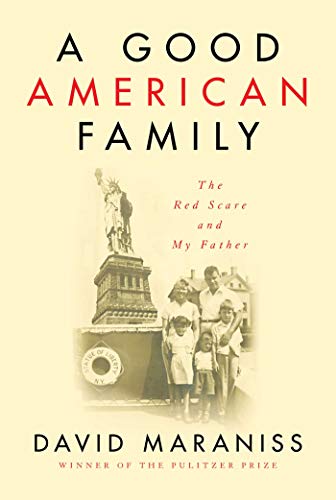 “David Maraniss digs deep into his father’s 1952 blacklisting and emerges with a riveting account of what disloyalty charges did to families in the McCarthy era, a profound meditation on what it means to be ‘un-American,’ and a sobering example of the corrosive effects of tagging journalists as ‘enemies of the people.’”

Known for years by his newsroom nickname, “Ace,” Maraniss had been snared in the committee’s net through the testimony of a local FBI informant who named not only allegedly Communist Party-affiliated Local 600 rank and file, but also miscellaneous party members with whom she’d crossed paths over her nine years working undercover for the bureau. Maraniss’ younger son, Pulitzer Prize-winner David Maraniss, was three years old at the time.

As one might expect, David Maraniss remembers little of his father’s encounter with the committee, his immediate dismissal from the Detroit Times, or the half-decade of professional and personal turmoil that followed. David’s brother and sister, both several years older and intellectually precocious, had a better, if still incomplete, understanding of what their parents were enduring at the time than David did.

In his new book, A Good American Family, David Maraniss digs deep into his father’s 1952 blacklisting, and emerges with a riveting account of what disloyalty charges did to families in the McCarthy era, a profound meditation on what it means to be “un-American,” and a sobering example of the corrosive effects of tagging journalists as “enemies of the people.”

Maraniss explores both his father’s story and other connected narratives. These include his parents’ early involvement with American communism at the University of Michigan, the experiences of other Detroit defendants who faced HUAC in 1952 (such as future Detroit mayor Coleman Young, whose searing, defiant testimony provides some of the book’s most electrifying moments), and his also-blacklisted uncle’s travails as a Lincoln Brigade volunteer fighting for the Loyalists in the Spanish Civil War (which gave him anti-fascist credentials that didn’t play well stateside in the McCarthy era).

Maraniss also chronicles the parallel struggles of playwright Arthur Miller, a fellow University of Michigan (and Michigan Daily) alum who lost his college roommate in the Spanish Civil War, and eventually found himself in HUAC’s crosshairs for his early Communist leanings and such prominent works as the perceived-anticapitalist Death of a Salesman and the Salem Witch Trials allegory The Crucible.

“As a biographer and chronicler of American social history,” Maraniss writes, “I’ve spent my career trying to understand the forces that shape America and to measure individuals by the whole pattern of their lives. Before now, I had always done this by researching the lives of strangers until they became personal to me.”

Maraniss says he feared that dredging up his family’s past in A Good American Family would reveal things about both his parents that he might later regret knowing. But instead, he writes, “I emerged with a clearer appreciation of the contradictions and imperfections of the American story—and with a better understanding of my father, of our family and its secrets, and of myself.”

Maraniss struggles to make sense of a painful period in his family’s history. This period encompasses not just the initial accusation and its origins, but his father’s subsequent blacklisting, which made it difficult for such a talented and accomplished newspaperman to get or keep a job, and uprooted the Maraniss family multiple times over the next five years.

Maraniss discovers a few aspects of his father’s life in the course of his research that dismay him, including editorials Ace wrote as a student journalist for the Michigan Daily defending the indefensible: Stalin’s decision to sign a non-aggression pact with Hitler in 1939. But such missteps are overwhelmed by—among other things—the humanity Maraniss finds in the powerful statement his father prepared for the House Un-American Activities Committee in 1952 and was not permitted to read.

In addition to parsing Ace Maraniss’ testimony before the committee and that of others called in Detroit that week, and exploring the stories surrounding them, A Good American Family also takes into account much of the scholarship on the eras it covers, encompassing not just classic studies of the McCarthy era like Victor Navasky’s Naming Names, and older books on the Depression-era heyday of the Communist Party of the United States (CPUSA) like Robert Cohen’s When the Old Left Was Young, but also more recent works that have traced the impact of blacklisting on leftists who managed to weather the storm, whether by naming names or by making costly personal, professional, and political compromises.

Stories abound of careers and lives destroyed or damaged by past associations stemming from the 1930s when capitalism was in freefall, and many loyal and intellectually vigorous Americans, like both of Maraniss’ parents—also equally attracted by CPUSA’s stance on civil rights and connection to the Peace Movement—seriously considered the viability of alternate economic and social systems.

In the early years of the Cold War, such past associations, however brief or insubstantial, could prove tremendously and persistently harmful. As the groundbreaking civil and women’s rights activist and lawyer Pauli Murray—herself a one-time loyalty defendant—writes in her autobiography, “In the atmosphere of McCarthyism, the issue of one’s loyalty was never finally resolved. It resurfaced in new situations, to be tested by differing standards, so that trying to prove one’s loyalty was like searching for firm ground in an area of treacherous quicksand.”

Especially well documented is HUAC and other loyalty committees’ impact on left-liberal and left-feminist government employees in New Deal agencies and Hollywood screenwriters and directors. Also under attack were journalists who left a paper trail of pro-socialist or pro-communist writings—like two-term Federal Power Commission chair Leland Olds, publicly shamed and ousted from the FPC by senate investigators in 1949 for views expressed as a labor journalist in the 1930s, or Ace Maraniss himself, who wrote Stalinist editorials for the Michigan Daily and later plied his trade at both city dailies and leftist papers.

Nearly as common are stories of federal employees like economists Leon and Mary Dublin Keyserling, who survived their Red Scare loyalty trials by denying past affiliations and avowing anticommunist (and even anti-civil rights) views, taking sharp right turns into the Democratic Party mainstream, and later salvaging their careers at the expense of their core beliefs.

As David Maraniss delves into the blacklisting of Ace Maraniss and its political context, he reaches a different understanding of his father, a man who—like his journalist son—was born with “ink in his blood.” He also develops an even greater admiration for “how much of a force for good” the allegedly “Un-American” Elliott Maraniss proved to be in the lives of not just his own family but for others he encountered in the newspaper world and beyond.

Maraniss concludes that his father seemed to have emerged from his ordeal “tolerant of almost everything but intolerance,” and to have resisted the reactionary ideological compromises that many of his contemporaries succumbed to out of fear or necessity. “So many better-known figures of the Old Left had taken other paths, either toward neoconservatism and staunch anticommunism or toward bitterness or despair, but [my father] had done neither,” Maraniss writes. “He emerged as a liberal but undogmatic optimist.”