The Golden Enclaves: A Novel (The Scholomance) 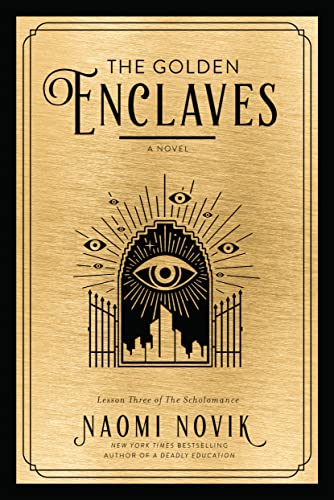 “The entire Scholomance series is a master work of storytelling, filled with memorable characters, an original world, complex personal politics, difficult choices with real consequences, and a folding origami plot of unexpected turns and surprises that form a perfect whole in the end.”

Galadriel Higgins: self-sacrificing heroine or world-destroying evil goddess? In a way, she’s both. She’s always fought against her nature: “a terrible slaughtering power and a hideous destiny of murder and destruction.” Simple healing or cleaning spells are incredibly difficult for her, but spells to enslave thousands or pull down mountains come to her easily. Though many of her fellow students are thoughtlessly selfish, El’s whole life has been spent reigning back her powers for the sake of others. Kids are cruel to her, thinking she’s weak, not realizing that she could kill them with a thought if she let herself go for one moment. She’s irascible, self-defeating, short-tempered, and rude, but the reader has always loved her.

The first two books of this trilogy, A Deadly Education and The Last Graduate, took place in the Scholomance, a magical school that temporarily defends magical children from all of the monsters of the world (maleficaria) that are eager to devour them. Upon graduation, they must run the gauntlet of all the worst of these, who are piled up at the school’s exit waiting for a feast. Most children don’t survive the experience, but wizard parents fight for the opportunity to send their kids anyway, since they stand a better chance of survival in the Scholomance than they do unprotected in the wider world.

The Golden Enclaves, final book of the Scholomance trilogy, begins seconds after the shocking cliffhanger that ended the second book. El is out of the Scholomance, reeling, overwhelmed with horror and loss, and retreats to her mother’s yurt and loving care. Her mother has always kept to herself, unwilling to live in any of the wizarding enclaves around the world that keep wizards safe from maleficaria and allow them to pool their power. El soon finds out why.

El is pulled away from her mother’s home by several friends who need her help: Someone is systematically destroying enclaves, attracting the worst of the maleficaria—mawmouths—to attack and kill the unprotected wizards. No one can kill a mawmouth; it sucks up a wizard’s power and the wizard himself, devouring him forever in its gut in a screaming torture that never ends. But El can. Her friends know, because she’s done it before.

So begins a reluctant battle in which El is called upon to rescue the enclaves she hates, filled with people who have built their power on cruelty and selfishness. Despite being an evil goddess, El has always cared more about others than she does about herself. In fighting this battle, she soon discovers the secrets behind the enclaves, the mawmouths, the Scholomance, and her own powers.

The revelations of secrets in this book is masterfully done. Novik has weaved several truths into the fabric of the first two books that are revealed to astonishing effect in book three. One in particular is that wonderfully rare gem: a surprise that the reader will not guess and yet when revealed is stunningly right, because it causes a dozen prior mysteries to click into place. When El was a child, a prophet who is never wrong predicted that she would bring death and destruction to all the enclaves of the world. That prophecy comes true—but not in the way anyone, least of all El herself, expects.

The series has always been filled with delightfully quirky, diverse characters, but El’s prickly demeanor and uncompromising moral sense made it difficult for her to make friends or even practical alliances. The Golden Enclave allows the growing weight of El’s selfless acts, often done without others even being aware of them, to result, finally, in others recognizing her worth (as the reader has always done) and showing their intense loyalty and love for her. It is not a pat conclusion, with characters falling into their intended, predictable slots in a storytelling formula, but it is an immensely satisfying one, in which complicated people find their place in the world and a measure of happiness to go with it.

The entire Scholomance series is a master work of storytelling, filled with memorable characters, an original world, complex personal politics, difficult choices with real consequences, and a folding origami plot of unexpected turns and surprises that form a perfect whole in the end. The teenage characters suggest a young adult audience, but adults of any age will revel in the rich storytelling and cheer for Galadriel’s final vindication and victory over evil.