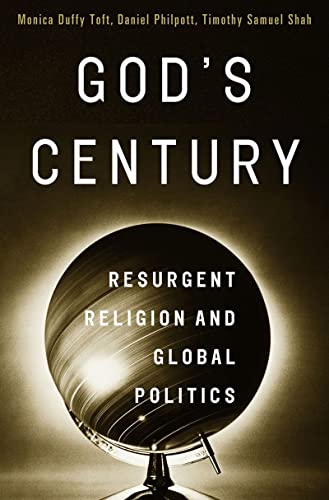 “This book answers the questions (of politics and religion) through two broad theses. 1. The main thesis of this book is that a dramatic and worldwide increase in the political influence of religion has taken place in roughly the past forty years. . . . 2. The second main thesis of the book offers an explanation for the widely different politics of religious actors . . .”

Thus, Toft, Philpott, and Shah begin their venture into the world politics and religion. This is not a book about the resurgences of Christianity. It is of the resurgence of all religions in all parts of the planet and how these religions have influenced regional and world politics over the centuries, including the 21st century. This about traveling from “God is everything,” to “God is Dead” to “Religion is alive and well”—and how democratic society and politics is part of the reason for resurgence.

This is a research book for the person studying political science and the effects religion has had on the evolution from theocratic monarchies to democratic societies. It is about the freedoms of individual faith as important as the freedom of self-expression in society. This is a scholarly work, reinforced by the selection of publishers, W. W. Norton, known for their post-secondary and graduate academic collections.

God’s Century is not as much of a book about religion’s domination of national politics, but of how religion and politics have come to coexist with natural ebbs and flows of the two interconnected spheres of influence working with and against the other.

It is also an attempt to understand the history behind political theocracies as we now understand them; from the middle ages to the present and perhaps beyond. It is about “the sets of ideas that a religious actor holds about what is legitimate political authority.”

The triplet of authors does not allow the reader to lose sight of the problems religion has brought upon nations nor the levels of social justice it helped achieve. The reader is brought through the twin doors: from the wealthiest nations to the poorest, visiting the destructions and creations of the multiple political-religious marriages of convenience and need, along with the failures and successes.

God’s Century is not slanted toward a religious “idealism.” The horrors of theocratic-political domination and fights between church and state are discussed thoroughly in the text. The authors go as far as creating a table for the reader denoting the religious wars from 1940 to 2010. Forty-four “religious civil wars” in all, with 32 being interfaith, with Islam versus Christianity representing nearly one-half of the conflicts, and intrafaith conflicts, with aggression between Muslim sects taking another quarter.

It is unfortunate that only the 1945 Israel-Palestinian war is the only war counted and none of the battles since. Or that the German Nazi regime’s mix of Christianity and Roman myths that lead to the Holocaust against Jews, Catholics, and various other secular and sectarian groups, are not mentioned. Nor are the current “religious civil wars” in Darfur and southern Sudan, which use “ethnic cleansing” as a cover for religious intolerance.

Where this lecture of theo-political changes direction from education to survival is where the authors achieve their goal. “Against the odds,” the authors write,” despite a powerful array of secularizing regimes, ideologies and social trends, God’s representatives have outlasted some of their most ferocious twentieth-century rivals.”

It is from this statement, well supported by the research, that they declare that, “God’s partisans are back, they are setting the political agenda, and they are not going away. That is what makes the present century “God’s Century.” Maybe not the entire century, but at least the last 70 years.

For those of religion and those who are nonbelievers of any faith, the arguments made are just and logical. Agree with them or not, the last chapter does provide the “Ten Rules for Surviving God’s Century.” The Rules contain warnings for those of both sides of the secular and sectarian discussion. Rules Four and Five are fine examples:

Most of all, the authors stress the need to maintain what the Americans codified in 1789, freedom from a nationalized religion as well as the freedom for all to practice the religions of one’s choice, including atheism, is mandatory for any democracy to survive.