A God in the Shed 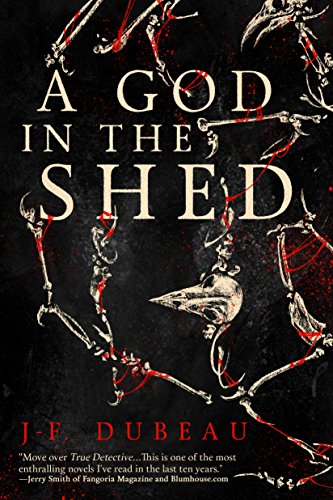 “an engrossing description of evil and the devastating results of its corruption . . .”

In the village of Saint-Ferdinand, Inspector Stephen Crowley should be triumphant. He’s captured a killer eluding the police for nearly 20 years.  Crowley’s less then satisfied, however, for he believes the killer had help.

“‘You really think he had an accomplice?’

‘How else could he have done this? Finnegan is a hundred and fifty pound wet and my son could beat him up on a bad day.’”

When more victims are found after Sam Finnegan’s arrest, Crowley’s hunch is confirmed, and the investigation becomes more intent. At the same time, other incidents in Saint-Ferdinand are drawing together the skeins of a connected but currently loosely woven tapestry.

Medical examiner Randy McKenziue steals a toy from a little girl’s grave. That night, at her father’s request, he disinters the body and pins it to the coffin with iron nails.

“Randy knew a little of the dark arts. He knew tricks, parlor tricks, miracles if he could pull it off.”

Bullied teen Venus McKenzie discovers something hiding in a shed in her family’s backyard. The thing keeps itself in the shadows so Venus can’t actually see it, but it senses her isolation, and welcomes her, offering her friendship and whatever she wants if she’ll “help” it.

“Inscrutable darkness danced around her. Even with her eyes closed, she could see how the light was devoured by the shadows. The voice whispered promises and kindness . . . it longed for freedom. More unsettling was how it hungered for blood and the lives that gave it . . .”

Though she wants to keep this secret to herself, Venus eventually confides in Crowley’s son, Daniel.

The two are soon thrown into the midst of not only his father’s investigation but a hunt of their own . . . for the origin of the thing in the shed, a creature they’ve come to realize has tremendous power but is imprisoned in the flimsy outbuilding by the most modern of inventions, the eye of a computer camera.

Then the creature escapes.

As Crowley pursues his own leads, he learns a reporter is in town. Chris Hagen is young and friendly. The problem is his business card, containing a symbol Crowley recognizes, making him avoid Hagen at all costs.

“. . . it had the same symbol printed on it, that of the Craftsmen.  The Craftsmen were  than a social club; they’d been a cult, born for a nefarious purpose. They were students of ancient, forbidden arts, unafraid of the consequences of their acts.”

Stephen Crowley is part of another group, the Sandmen, who destroyed the Craftsmen. “His own group was different. They had a much more focused plan for the town’s future.”

What does an independent news reporter have to do with that long-ago dispersed group?

As Crowley becomes obsessive to the point of madness, estranging his son in his determination to protect Daniel and destroy the creature, other townspeople also make sacrifices—willingly fulfilling the predictions made about them to protect those they love.

Venus and Daniel are drawn into a vortex at whose center is a god intent on keeping a bargain made long ago with a unsuspecting youngster, its bloodthirsty tentacles reaching from the past into the present and exacting its revenge on those descendants who “broke their promises.” Added by the ghost of a victim, the two struggle to find answers but the solutions point to sacrifices as cruel as the creature they’re fighting.

“‘You can kill it, but it doesn’t have to die. Not if it chooses not to. It plays by a different set of rules.’”

A God in the Shed is an enthralling tale beginning as a police procedural but quickly escalating into a foreboding horror story.

With succeeding chapters giving the point-of-view of various characters, the reader gets a good perspective and a variety of opinion as events unfold. In this novel, the sins of the fathers do indeed visit themselves upon future generations, most of whom are ignorant of the reason. No one is spared, whether good or bad, the innocent as well as the guilty, and the unexpected deaths of main characters may shake readers somewhat.

While the prologue to the story might have served as a full-length novel of its own instead of being relayed through the explanations of the surviving original members of the incident, the epilogue suggests there could be a continuation. Either way, A God in the Shed is an engrossing description of evil and the devastating results of its corruption no matter how beguiling the offer.