The Glorious American Essay: One Hundred Essays from Colonial Times to the Present 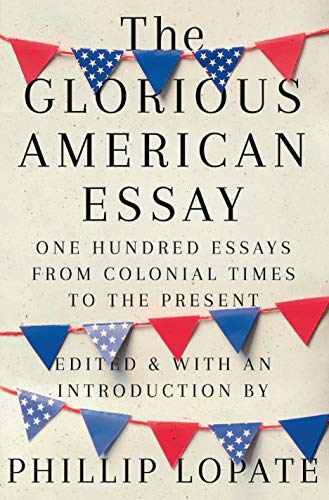 “a marvelous volume that introduces the reader to the wide variety of American writing and literary thought of the last two centuries of our nation’s history.”

In the age of Twitter and TikTok, the notion of someone writing a long essay on the issues of the day or whatever strikes their interest may seem more than quaint. Yet as this anthology clearly shows, the great American essay is a unique literary tool that has survived many transitions of communication mediums and is alive and well today.

Selected by the editor across the span of American history, these essays cover a wide array of topics—political, social, cultural, and even quirky. The editor has cast a wide net to show the evolution of the essay as an enduring literary form.

The political essays include writings from some of America’s most famous politicians and philosophers including Thomas Paine, Alexander Hamilton, George Washington, and Thomas Jefferson, edited for clarity and highlighting some of the most important political thoughts in American history, including the Federalist Papers and Washington’s Farewell Address.

Accompanying these essays is an excellent set of essays on the struggles of women and minorities to secure full political and social equality, beginning with an article written in 1790 on the equality of the sexes, and continuing into the 19th century as writers such as Sarah Moore Grimke began to draw parallels to the burgeoning abolitionist and feminist causes.

Succeeding essays carry forward the argument raised by Margaret Fuller in 1845 on the capability of women to reason as well as men, and the essay by Elizabeth Cady Stanton, considered the greatest feminist thinker of the 19th century on the extreme individualism of independent solitude. Taken together, all of these essays show the aggregate thinking of a rising feminist wave in American society that eventually led to the 19th Amendment granting women the right to vote.

Concurrent with these essays is another progression of essays outlining the struggles to end slavery and grant civil rights to all Americans, beginning with Frederick Douglass in 1848 with “To My Old Master, Thomas Auld.” The editor contrasts that with the more firebrand essay “Comparative Condition of the Colored People of the United States” by Martin R. Delany, a contemporary of Douglass, who harbored more critical and pessimistic views of racial prejudice in the United States. In the post-Civil War and civil rights era, the essays by W. E. B. DuBois and Ralph Ellison cover the continued struggle to achieve not only political, but economic and societal equality into the 20th century.

The cultural essays include some remarkable sermons, beginning with Jonathan Edwards’ “Sinners in the Hands of an Angry God,” one of the most famous sermons preached in America and an exemplar of the First Great Awakening religious movement in America. A later piece by Dr. Martin Luther King, “Beyond Vietnam,” shows King’s powerful rhetoric in addressing the controversial war with the contemporary civil rights movement and urban turmoil.

In addition, the editor includes several essays simply to point out the more esoteric aspects of American culture and thought, ranging from H.L Mencken, one of America’s great literary curmudgeons, to incisive modern feminists such as Susan Sontag and Nora Ephron.

And, of course, no volume considering the American essay would be complete without a few essays on the subject of writing essays, and the literary art in general. Wonderful writing by Katharine Fullerton Gerould, Gertrude Stein, and Guy Davenport examine the art of writing, the evolution and purpose of the essay, and even the joy of reading in general, a pasttime that has certainly changed at least as much as writing in the age of the internet and social media.

With the ongoing transition from magazines to the internet the essay has also transformed, yet well written and insightful pieces can still generate commentary among the public and bring notoriety to the author. This is a marvelous volume that introduces the reader to the wide variety of American writing and literary thought of the last two centuries of our nation’s history.